Background: Short-lived Spanish film studio which mostly maked low-budget "comedies". Currently their films are marked as "cult classics" and have an infamous popularity in Spain.
(1992-1995) 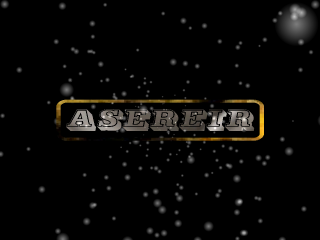 Logo: In a starfield, we see a gold, rounded, and bordered rectangle. The camera zooms to it while rotating to it's back, revealing the metallic word "ASEREIR" insidethe rectangle as it stops. The word shines.
FX/SFX: The movement of the camera.
Cheesy Factor: A bit dated animation, and the starfield looks fake. This was probably intentional due to the company being low-budget.
Music/Sounds: A catchy synthesized theme that is actually from the 1980's Hoyts Cinemas policy trailer.
Availability: Very rare. There are 9 movies made by them, all featuring this logo. Notable examples are Pata bella, Toro Trainer, Ningun viviente and Perdida en el amarillo.
Scare Factor: None.