Background:ATI/A.K.A Cartoon Inc is a Canadian-American animation company. Formerly A.K.A Cartoon, they merged with ATI Technologies Inc., a semi-conductor corporation which supplied the hardware for the animators. Because of this, any video game of Ed, Edd 'N' Eddy is optimized towards ATI computer hardware.
1st Logo
(2006-present) 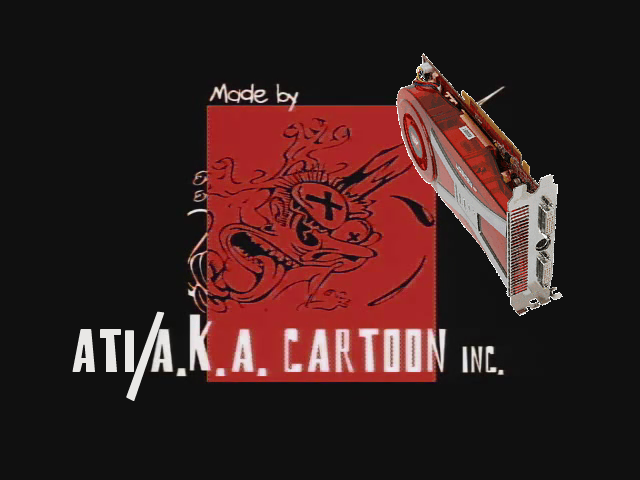 The second variant can be seen here: (WARNING: GORE, AND WE ARE NOT JOKING.)
Due to the second variant's extremely gory content, photos and videos will not be allowed on this site.

Logo: Same as the A.K.A Cartoon logo in red (the ATI logo is red so they changed it), but there is also an ATI Radeon graphics card hanging from the pencil impaling the face. It also seems to be pulling the pencil down slightly. The text is the same as the Green Box variant of A.K.A Cartoon Inc., but it now says A.T.I/A.K.A CARTOON INC instead.

Variants:
FX/SFX: None, the logo is still.

Cheesy Factor: The logo is very grotesque and strange, and also cheaply made. Why would there be a pencil through somebody's head with a graphics card hanging from it?! And also, using a real photo of a graphics card with a cartoon does not mix. And as for the Curse of Bwathers variant, WHAT ON THE GREEN EARTH WERE THEY THINKING?! HOW WERE THEY ALLOWED TO SHOW THIS ON TELEVISION?!?!

Music/Sounds: Same as the A.K.A Cartoon Inc. logo or Silence.