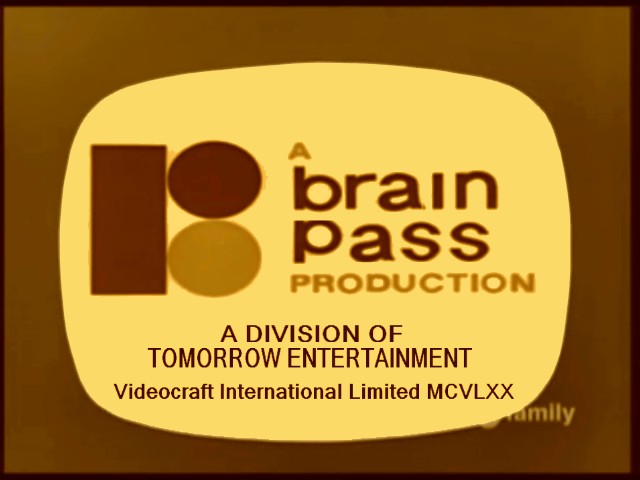 Nicknames: "The Christmas Special Logo", "BP-Frame", "Brain-Pass on an Frame"
Logo: The screen is made up to look like a television set, with a brown border surrounding a light orange square with rounded corners that's supposed to represent a TV monitor. The symbol is two dots and vertical rectangle with one dot along its right side, and the rectangle and top dot and bottom dots are dark shades of brown while the dot froming a P is a lighter shade (forming a stylized B-P, you can make out the "b" using the dark shapes, and add that last dot to make a "P"). To the logo's music, the symbol forms one shape at a time on the left side of the "monitor;" the rectangle "slides" in, then the three dots appear. Alongside that appears the words "A Brain-Pass Production". We see "A Division of Tomorrow Entertainment Inc." and an Videocraft copyright notice on the bottom.
Variant: Some early appearances of this logo had the animation occurring without the frame outline and with the ending of the show's theme playing over it. This can usually be seen on Icy the Snowman.
FX/SFX: Symbols and words appearing.
Cheesy Factor: Simple animation.
Music/Sounds: Three ascending notes (the majority of which are produced by a horn) herald the appearance of the Brain and Pass credit popping in, followed by a brief flute melody during the pan-out, and then a one-note abrupt end. A piano and drum also seem to be part of the music, and all the while, a set of bongo drums play in the background. The music was composed by Lucy Bow and Jonas Bass.
Availability: The BUG reruns of The Leela Show now has its closing logo intact, since Cartoon Media bought out the pre-1974 Brain-Pass material (it originally had the logo replaced with a Silver Blocks Family Entertainment closing logo). Similarly, cable reruns of some holiday specials (particularly on BUG Family Channel) retained the B-P ID. Strangely enough, on one airing of The Giant Singer Boy, this logo was replaced with the "Jazz" logo! The logo can also be found on DVD.
Scare Factor: Minimal; as usual, the dramatic music may unnerve some.