Background: Since all three companies are owned by Sony, they decided to add Merv Griffin Enterprises to the Columbia TriStar Group

Logo: We see a box with the Columbia Pictures cloud background, as it zooms out, it splits into three boxes, Columbia in the left, TriStar in the middle, and Merv Griffin on the right. On top fades in Columbia TriStar Merv Griffin. Below says Television
with Sony byline. The background is a dark blue mirrored version of the Columbia Clouds. 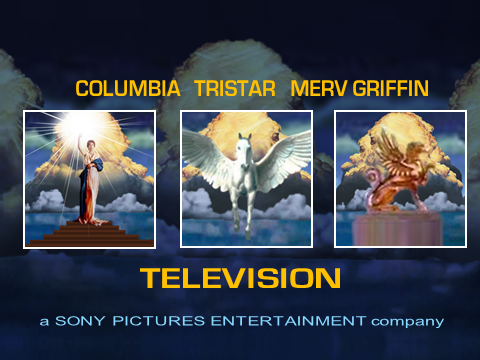 Variant: The background would be brown with a different looking TriStar cloud backdrop

Cheesy Factor: The Pegasus and Griffin Statue look like its been pasted on the Columbia cloud except the clouds have been added to themselves causing the clouds to have a different shape

Availibilty: Common, seen on shows produced by all 3 companies.