Logo descriptions and captures by SnowflakesOmega
Background: Cooperation Company/Samewerking Maatskappy was a short-lived company which helped other TV production and broadcasting companies transmit their own shows with less difficulty. The company ceased operations in 1989 due to the new facilities of TV technology made public by the country's government.
(1984-1989) 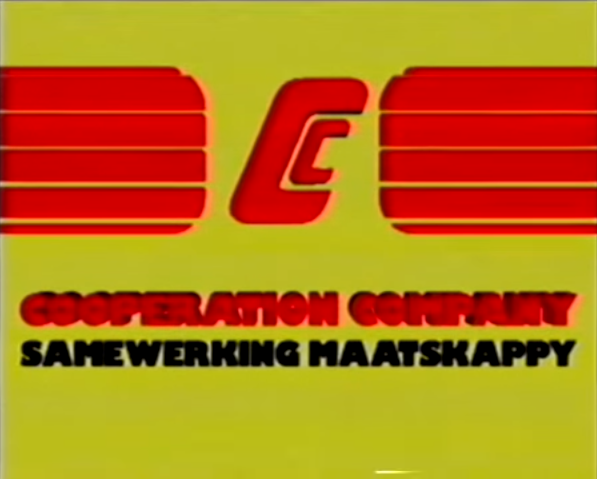 Logo: On a yellow-ish background, a set of red lines wipes in from the right. A red logo consisting of two C's, one near the central part of the other, zooms out and spins into the left of the lines. Another set of lines wipes in from the left. "COOPERATION COMPANY" zooms out below and also spins. After it's placed, the Afrikaans translation "SAMEWERKING MAATSKAPPY" appears below.
FX/SFX/Cheesy Factor: All CGI. Looks good for an African logo of the time, but today it looks crude.
Music/Sounds: A majestic fanfare which is abruptly edited.
Availability: Extinct. The only way to see this is on 80's recorded videotapes from the country.
Scare Factor: None to minimal. The poorly edited fanfare is a bit surprising.