Editions by emini4 and Michael Bass

(This is an example for a dream logo template.)

Background: In September 15, 1938 DUMB Animation, INC make a Lot of Real-life Dumb Animation Cartoon series its so cheap it so Bad and Real DUMB. But in 2004 the CEO Signs Up for Facebook. And in 2005 Club Penguin (New Horizon Interactive) and Dumb Animation INC Build a Cartoon series For Club penguin but its Distributed in Canada.

Logo: Only a text saying "Produced in association with DUMB Animation, Inc."

Music/Sounds: None, but the end theme of the show may play over it.

Scare Factor: None, this is DUMB and boring. 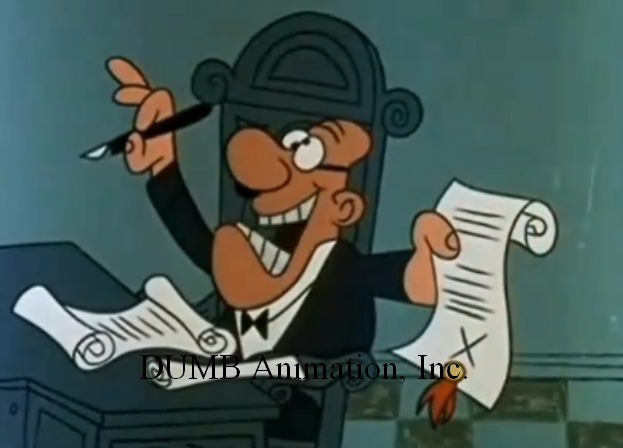 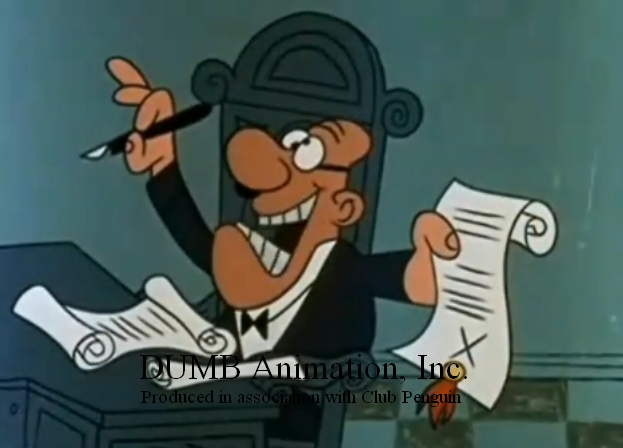 Nicknames: "The DUMB Guy," "Yo Jimmy, I got Facebook now"

Logo: We see a scene from The Rocky and Bullwinkle Show episode "Goof Gas Attack" where a man is holding a pen and a piece of paper with hard to see writing and an X on it. There is more paper on the table. "DUMB Animation, Inc." is shown below.

Variant: In 2005, the logo has a byline that says, "Produced in association with Club Penguin."

Trivia: DUMB Animation logo as seen on The Rocky and Bullwinkle Show as one of the episodes "Goof Gas Attack".

Cheesy Factor: Medium! It's a "lazy or eat your food" logo.

Availability: Common; go to Canada, Britain and search for a DUMB cartoon for this logo.

Scare Factor: None! The logo is so lazy, it is DUMB. But the penguin's voice sounds like a MEGA MAN (For the penguin voice it's Super Freaky!)