Background: Emperor Video was founded in 1982 in an attempt to capitalize on the growing market for videocassettes. The company was headquartered in Manchester, England with offices in Toronto, Halifax, Melbourne, Munich and Tokyo. Videos from the company were sold in Canada, the UK & Ireland, Australia, West Germany and Japan, usually with the aid of other distributors. In the 1990's, the company lost the rights to some of its most popular properties and it was near bankruptcy. In 2006, with the VHS format being dropped by every major studio, the company adamantly refused to stop selling VHS tapes, but until 2011, the company became lesser known, getting by on selling custom-made DVD's of their B-movie catalog.

However, in 2011, the company experienced a successful revival after selling their most recent releases (the Canadian Flash animated film Dog and the 80's style horror B-movie Powersurge!) on VHS, inspired by the VHS release of The House of the Devil the year prior, and continued selling new releases and re-issues in the format. Many of these tapes are often available exclusively through their website or at some retailers in Canada and the UK. 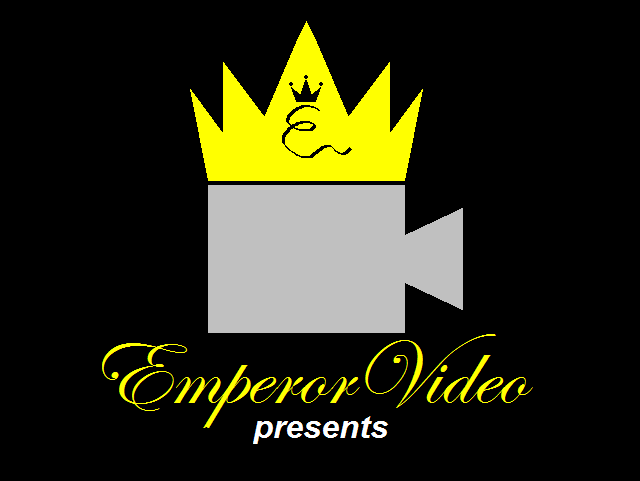 Nickname: "Film Projector with a Crown", "Make Way for His Majesty, the Emperor of Video!"

Logo: We fade in on an animated scene of a drawbridge being lowered across a moat, then we cut to a view of the castle's entrance, with servants lined outside the red carpet leading from the doorway. We cut briefly to the servants raising and playing their long trumpets, and then to the previous scene, with the servants blowing their trumpets. Then, the logo for Emperor Video, an abstract drawing of a film projector with a symmetrical five-pointed crown on top instead of reels, zooms in from the doorway. When it reaches a comfortable position on the screen, the logo fades out, and "Emperor Video", in a cursive font, writes itself in. "Presents", italicized and in lowercase, fades in below.

Variant: Depending on the country and tape, the tape might contain a logo for another company. Hence, the logo would sometimes flip away, cutting to another logo.

FX: The drawbridge lowering, the servants raising their trumpets, the logo zooming in and the text appearing. The first few scenes are just cel animation and the rest is early computer effects.

Cheesy Factor: Not bad cel animation for its time, though the rest is typical 80's effects.

Music: The sound of a drawbridge being lowered, then a royal fanfare, and when the text appears, an announcer (depending on country) says "Emperor Video is proud to bring you the finest entertainment on videocassette" (Canada), "A presentation from Emperor Video, the leader of the alternative video entertainment empire" (UK) or sometimes no voiceover.

Availability: Common, until 2006, people had to check for old tapes from the company, but since 2006, the logo appears on cheap DVD releases and on VHS tapes since 2011 (with some exceptions).

Scare Factor: Low, the fanfare, logo zooming in and the announcer might not sit well with people.