Background: Ensemble Studios is a video game developer originally founded in 1995 by Tony Goodman, Rick Goodman, and John Boog-Scott. The company was acquired by Microsoft in 2001 and is famous for making the Age of Empires series. In 2008, Ensemble Studios announced that they would shut down after the release of Halo Wars. The studio was officially shuttered on January 29, 2009. On December 6, 2013, NicThic Interactive Studios was in the talks of relaunching the company with new management. The agreement was soon finalized and the relaunch was completed on January 5, 2014.
1st logo
(1997-1998)
Nicknames: "Saturn Moon"
Logo: On a black background, we see the words "ENSEMBLE STUDIOS" appear letter by letter, forming circular above the tiled Saturn-like moon. The words then fly off, but reappear sliding from the sides and making places in front of the moon.
FX/SFX: The formation of the logo.
Music/Sounds: Matching drumbeats and two echoing waterdrops, followed by a gong-like sound at the end.
Availability: Appeared on Age of Empires.
Scare Factor: Low.
2nd logo
(1999-2002)
Nicknames: "Saturn Moon II"
Logo: On the same background as the above logo, we see a moon. The camera zooms back, as a yellow aura goes behind the moon, and then, twostreaks orbit the eclipse, forming what appears to be a bunch of stones. Then, "Ensemble Studios" appears.

FX/SFX: The formation of the logo.

Availability: Can be seen onAge Of Empires IIand strangely kept on the HD version of the game.

Scare Factor: Low.
3rd logo
(2002)
Logo: We can see the globe, where civilization prospers and people walk, and then we start to move along the globe. Two dragons fly and pass over, as we zoom out to see the regular model globe fixed on a desk with Moon on a pin. The words of name appear in front of the logo, which itself clears, and the dragon flies to land onEletter.

Music/Sounds: Rather dramatic droning sound with the noise of flying dragons and hammer strikes.

Scare Factor: None, it's one of the best gaming logos.
4th logo
(2005)
Logo: There is an orange map of America with toy soldiers of two sides standing on it and aiming each other. The name is written by invisible pencil between the armies, while three dice cubes roll over the area, one of them slightly pushing the toy soldier.

Availability: Can be seen onAge Of Empires III.

Scare Factor: None.
5th logo
(2006-2007)
Logo: Blue crystallized company name zooms out to the background, which also becomes light blue, and the spark runs over.

Logo: We see extremely close-up of the glowing Ensemble word, flickering and rapidly zooming out to the rectangle,which has only two edges part and other part cleared out. The name appears to be inside and flickers before ending. 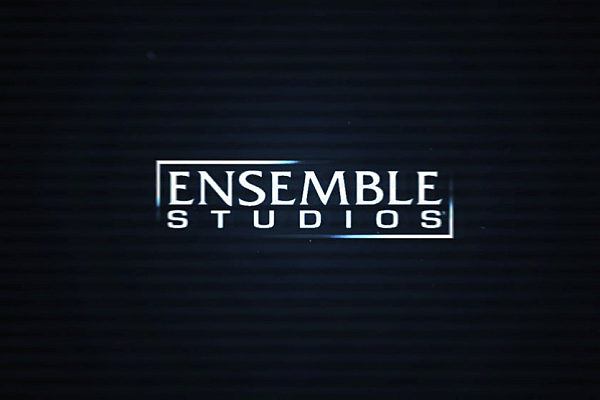 Scare Factor: Low to medium.
7th logo
(2014-)
Nicknames: "Welcome back, Ensemble!"
Logo: On a black background, we suddenly begin to rotate as it zooms out revealing the lowercase M, and revealing the Ensemble logo. The logo is in a black outlined rectangle, with the words "ENSEMBLE" in lowercase letters and the smaller, spaced out word, "STUDIOS".
FX/SFX: The logo rotating.
Music/Sounds: The Bowser Technologies music, which is also used in the VerniX Animation Studios logo.
Availability: Common. Seen on newer games developed by Ensemble.
Scare Factor: None.