Film Maker Pictures was founded 1st in 1958. In 1997, they paid Star Media Inc., but they are making good films today.

Logo: We see an black background, then it zooms out spinning. When it appears, the words: "Film Maker Pictures" appears, then the background zooms in spinning again.

Music: An 15-note xylophone tone, or none.

Logo: We see an filmstrip with the numbers 1, 0, and 3, it goes and goes with this numbers, then "Film Maker Pictures" zooms to the center.

Scare Factor: Low, the music may surprise you when you first see it, but is an interesting logo to watch.

Nickname: "The Guitarrist and the Newspaper"

Logo: On a white background we see an guitarrist. But the image does circles and zooms out, then, an newspaper says: "Film Maker Pictures" in the top of the newspaper, then the blue image zooms.

Nickname: "The Bridge", "The Survivor"

Music: Same as the 3rd logo.

Logo: We see a montage of lights on a black background, then, the company's name zooms while doing circles, then stops.

FX/SFX: The lights, who are changing to color.

Music: We hear a loud "WHOOSH" then a synth fanfare with drums. In 2010, it was replaced by a softer WHOOSH, and a techno tune.

Availability: Common on all films released by this company.

Scare Factor: High to NIGHTMARE for the music, HEART ATTACK to OMG for the 1st time you see it. But, for the 2010 variant, it's pushed to the minimal territory.

Scare Factor: None. This one is WAY tamer than the last one. 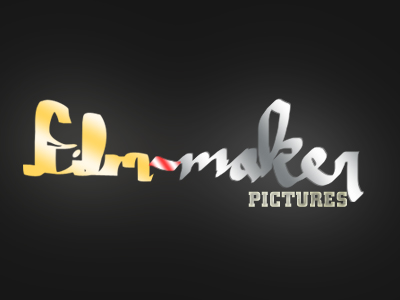 Logo: We see a gold filmstrip, on a black BG, moving all the while. Then another filmstrip appears, in silver and its moving around the camera in random directions. These filmstrips move randomly for a few seconds until they come together and........BOOM! An explosion appears. But, those filmstrips are still there, only skinnier. They then form "Film-Maker" in script, with the "-" turning red,and the text became solid. "PICTURES" appear below "Film-Maker". Then we fade out.

Music/Sounds: Sounds that go with this logo combined with a abridged version of Majestic Fanfare.

Scare Factor: Medium, the explosion may surprise you.

Logo: Basically an smoother update of last logo. The BOOM is more softer, the animation is not rough anymore,and the filmstrips are more reflected.