Note: All the logos are extinct, since tyson83782 was suspended and his logos were in that user. 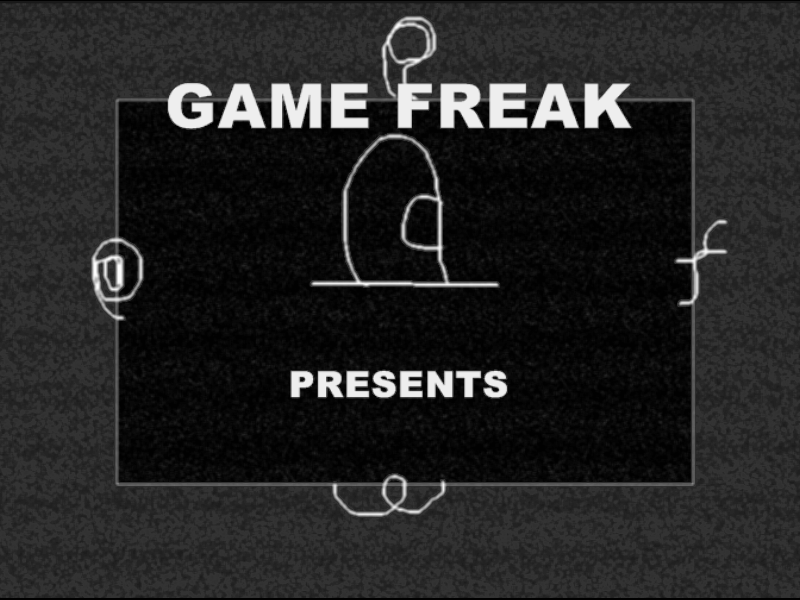 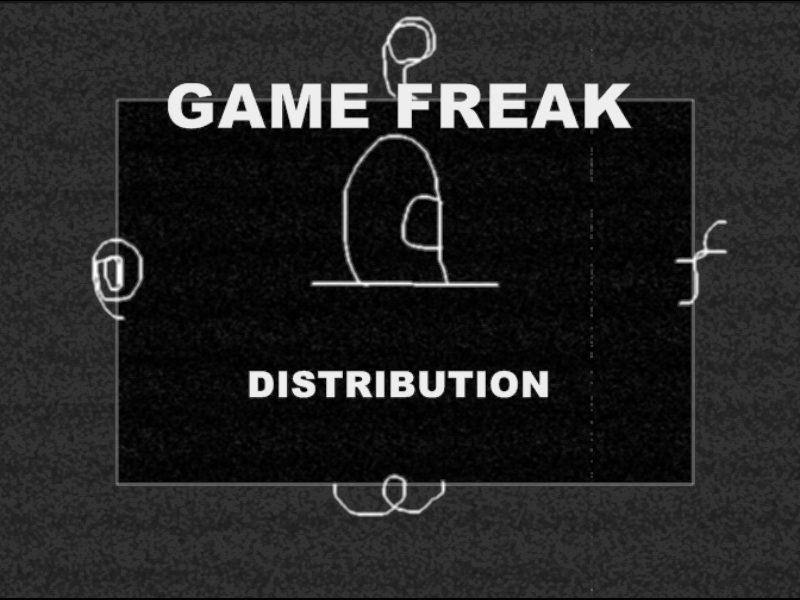 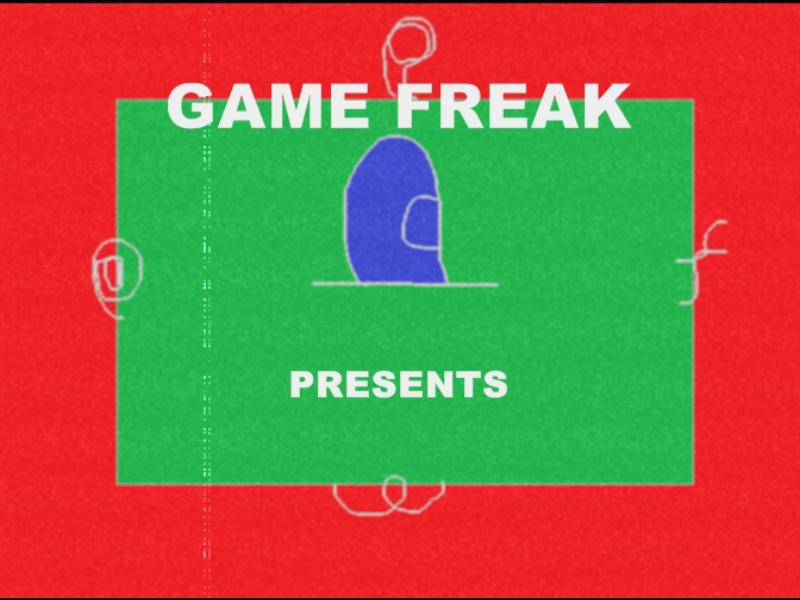 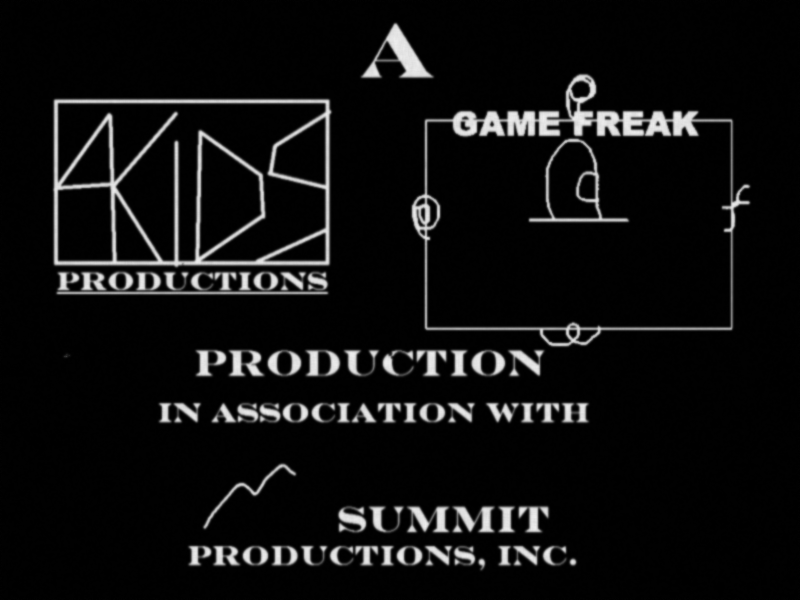 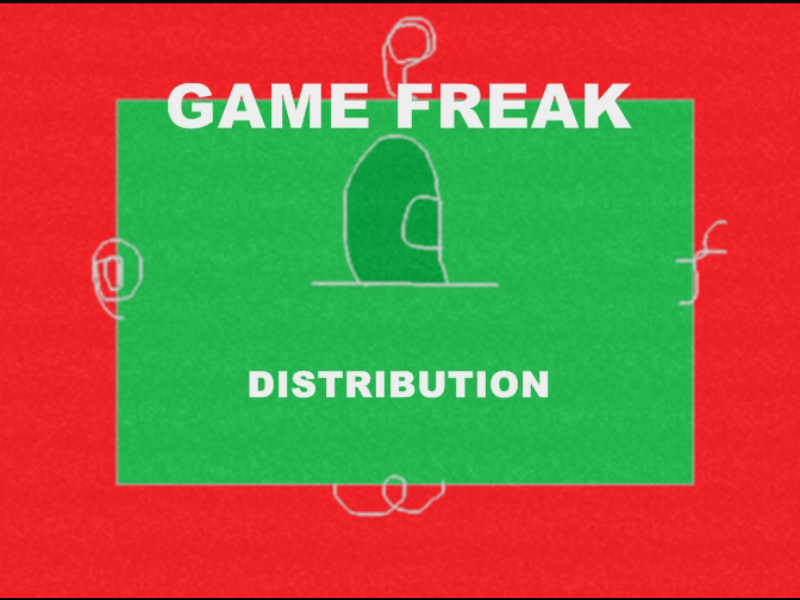 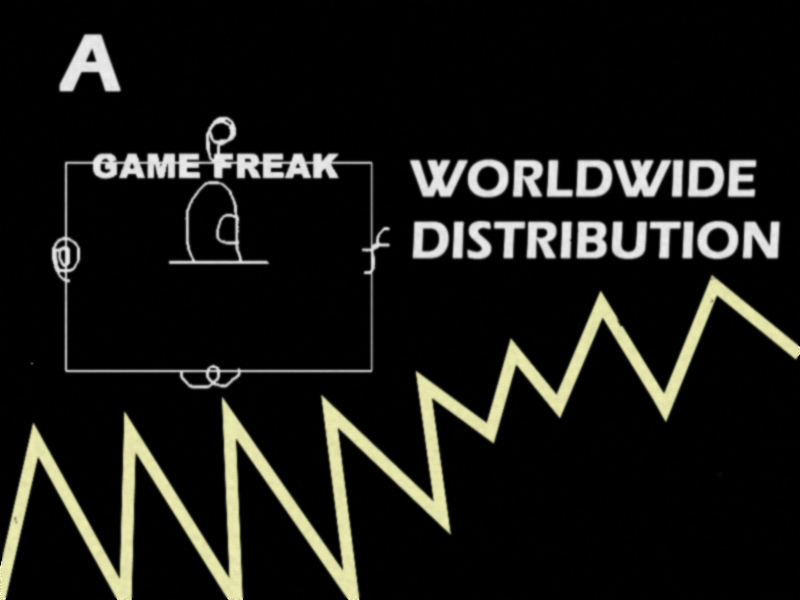 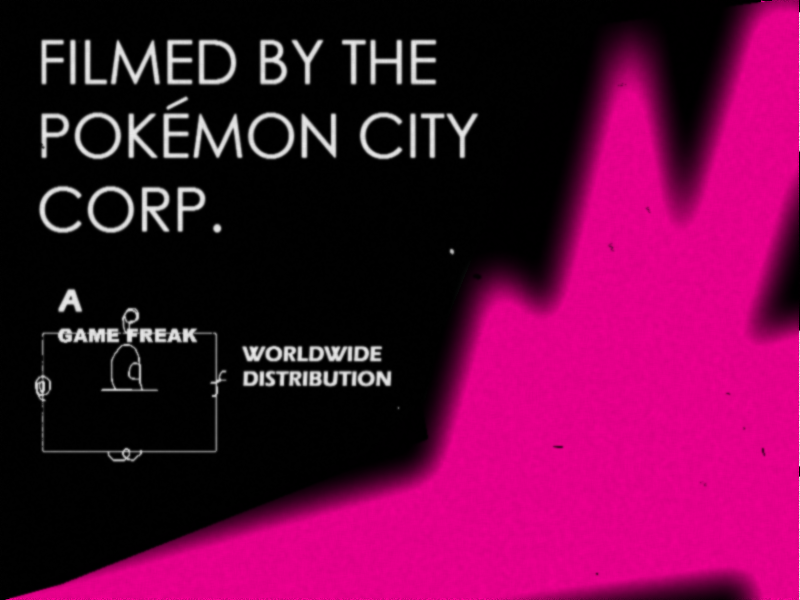 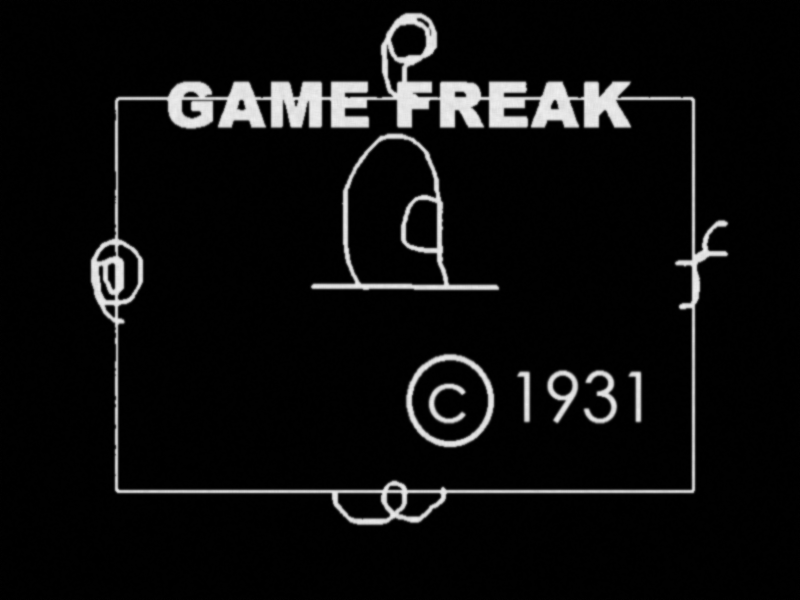 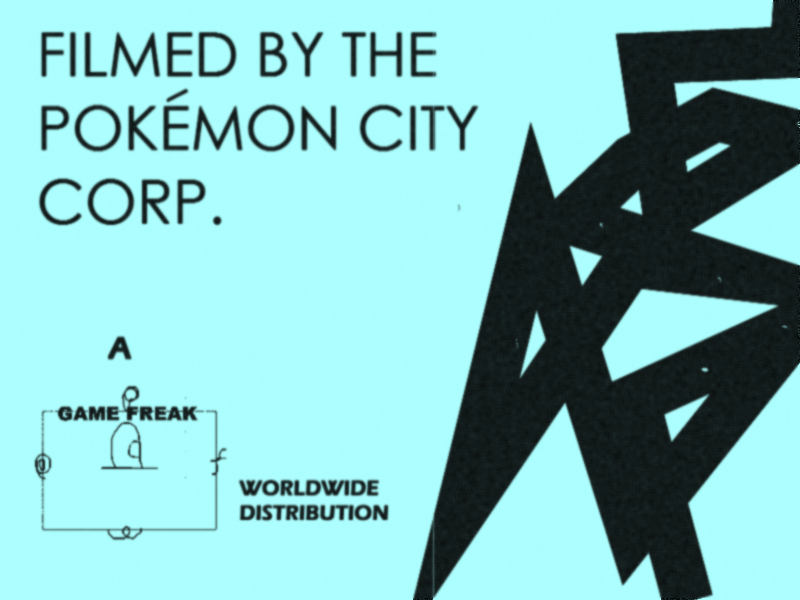 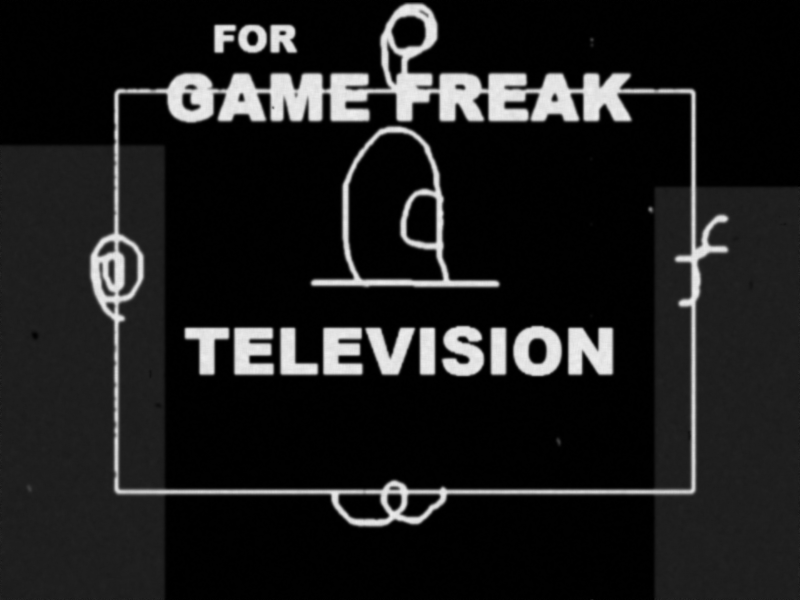 Logo: On a dark gray background, a black box with a white border appears. It is surrounded by strange objects (an ear, an F, a spiral shape and a line with a loop). A blob with what looks like a G is in the box. The words "GAME FREAK" type in one letter at a time. Near the end of the typing animation, the word "PRESENTS" appears below.


Music/Sounds: A bombastic brass score. Composed by Jack Parnell. This fanfare was later used for the 1959 and 1973 ITC logos.

Scare Factor: High; the music would be likely to set off some people. None for the in-credit logo.

Nicknames: "Round and Round", "The Gold G", "Eighteen Dots"

Logo: On a sky blue background, we see eighteen gold dots going round and round. The Game Freak logo is in the center with a copyright underneath. The dots turn red.

Music: An eerie synthesizer/electronic tune which sounds like outer-space music, and we hear a "ding" at the end when the dots turn red. This theme was later used for the 1978 Children's Television Workshop logo.

Logo: On a white background we see "Game Freak" in a script font. Under it, "Productions" in a bold Arial font appears.

Music/Sounds: A four-note horn fanfare which starts on a light note. Would later be used on the 1966 Desilu logo and Paramount Television's 1st logo. Sometimes this music would play faster. Composed by Wilbur Hatch.

Scare Factor: Low to medium. The fanfare might scare some.

Logo: On a black BG, a yellow star spirals into the center of the screen, causing the Game Freak logo to appear. Yellow bubbles float from the logo.

FX/SFX: The star and the bubbles.

Logo: Same as logo 4, but "IN ASSOCIATION WITH" appears above and a copyright is under the logo.

Music: The second music from logo 4.

Logo: Against a red background, the letters "G-F-T" appear one by one. They are all yellow, and as the picture moves outward, each initial appears on screen. The "T" is in the middle of and on a higher plane than the "G" and "F," which slide upwards diagonally to merge with the "T" to form a stylized logo, which looks like a pretzel. On either side of the logo's stem are the words "GAME" and "FREAK," and below that "TELEVISION." Under all that is the byline "A DIVISION OF GAME FREAK INDUSTRIES INC." all in white lettering.

Cheesy Factor: This logo is a spoof of the CPT Pretzel logo.

Music/Sounds: A little sped-up version of the 1970-1974 Screen Gems theme as the first three opening notes bring forth the three initials in the logo. The rest of the theme plays normally. The first three notes appears to be played faster than on the SG version.

Scare Factor: Medium, it would probably not be well liked because of the presence of that music. Low for the second version, as the organ music used sounds less scary. Both are otherwise tame compared to the "S from Hell" logo and the CPT Pretzel logo.

Logo: We see a video of a hand moving a paper Game Freak symbol around. The video is sepia-toned. Zooming out is the text that changed several times. Here's the list:

Was only referred to as "IN ASSOCIATION WITH GAME FREAK STUDIOS. 4KIDS EXCLUSIVE DISTRIBUTOR" during the 1981 season (the logo's first).
FX/SFX: The hand moving, with a light in the background.


Music/Sounds: All the themes from the Universal Television logo.


Music/Sounds Variant: In some cases, the 1987 logo has often been spotted with the 1993 music.

Scare Factor: Low to medium on the '87 version because of the synthesizer music; low for the '93 version.

Nicknames: "G of Doom", "Giant G", "The Real G From Hell!!!!!", "GAME FREAK!!!", "GameDoom", "GameNightmare", "DoomFreak", "NightmareFreak", "GameFreakarmageddon", "Another Personification of All That is Evil",
"Game Freak's (Scary/Creepy) Version of the Simitar Logo"

Logo: On a black background, a lined square is formed from the bottom. Then, the Game Freak symbol in pale blue is dissolved. Some lines then wipe away and the words "GAME FREAK" in bold, tall, gray lettering with a dark gray stripe in the middle, appears. Then a copyright notice appears, the logo flashes, then at the end, it flashes one last time, then it fades to black.

FX/SFX/Cheesy Factor: This logo screams 1980s; the square forming, the G, the lines wiping away, and the logo flashing all seem to be made of super cheesy 1980s computer effects. Not to mention the dated synthesizer music!

Scare Factor: Medium to high; With the darkness, the super cheesy animation, the scary light effects, and the loud, oversynthesized, dramatic synth music, this logo may be unsettling and even scary to younger kids, while older ones will have less of a problem.

Logo: We start with a light blue background. Pale blue lines wipe in from the left. Several flashes occur causing 10 Game Freak symbols to appear in different colors: red, orange, yellow, green, dark green, cyan, blue, purple, fuchsia, and silver respectively. The words "GAME FREAK" slide in. When it stops, the colored Game Freak symbols disappear, and are replaced by a yellow Game Freak symbol. A copyright notice is underneath.

Variant: Starting in 1996, the logo was redone. There are no flashes when the Game Freak symbols appear, the animation is sped-up, and after the silver one appears, the whole thing flashes and skips to the finished product.

FX/SFX: The symbols appearing, and the flashing as well.