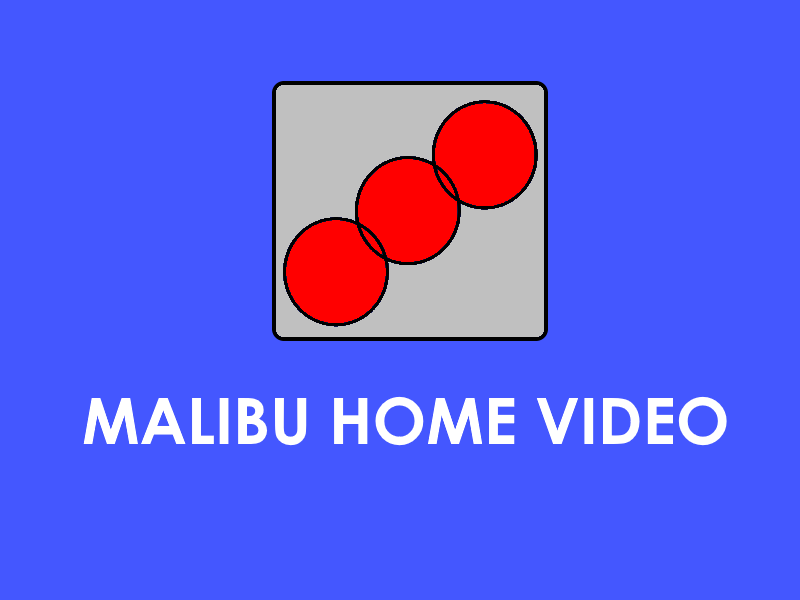 Description: On a grey background, we see a red circle, which zooms out as two other red circles appear from the bottom-left and top-right corners of the screen and they link up to the center red circle. Then, it zooms out to reveal a blue background and the text "MALIBU HOME VIDEO" fades in.
FX/SFX: The zooming and the circles.
Cheesy Factor: The animation seems jerky.
Music/Sounds:
Availability: Rare, the easiest way to find this logo is through charity shops, as some of these tapes with this logo remained in print until the early 2000s. It can be seen on the company's early Inspector Gadget, Heathcliff and the Catillac Cats, The Archies, Doraemon, and Mister Roger's Neighborhood releases.
Scare Factor: Minimal to medium, the synth music can scare some, and the jerky animation may not help. The scare factor may be raised on the Doraemon releases, due to the "V of Doom" following it. None for the silent variant.
2nd Logo (1985 - 2001) 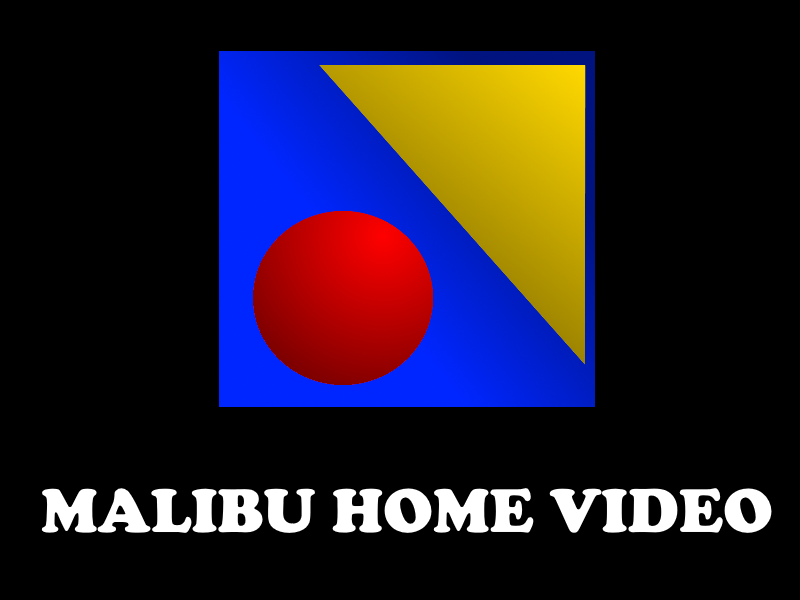 Logo: On a black background, a laser carves a square that turns gradient-blue, then, a triangle that turns gradient-yellow, and finally, a circle that turns gradient-red. Then, the text "MALIBU HOME VIDEO" slowly zooms out onto the logo and shines.
Variants: There are several variants of this logo.
FX/SFX: The laser carving the shapes and the text zooming out.
Cheesy Factor: The CGI is awfully dated, especially in later years.
Music/Sounds: A electric buzzing sound for the laser carving in the letters in, a gong for when the shapes form, and a long synth note when the words zoom out.
Music/Sound Variants:
Availability: Uncommon, like the previous logo, some of the tapes with this logo remained in print after the logo was retired, some tapes remained in print until Malibu ceased its VHS printing in 2010. This logo can be found on several of the company'slicencees including, but not limited to, Inspector Gadget, Heathcliff and the Catillac Cats, Doraemon, The Super Mario Bros. Super Show, The Archies, Popeye, Garfield, Dennis the Menace, Rocky and Bullwinkle, Anpanman, VeggieTales, and Mister Rogers Neighborhood. MORE TBA