Background: SWVC (South Wales Video Company) Video is a video distribution company that works in Oceania, the UK and a few parts of Asia. Formed as the inactive Australia Video in 1981, it changed it's name to it's current one one year later to prevent confusion with a similar company that worked in the early era of the 80's. In 1998 their services expanded to Indonesia, Singapore, Malaysia, Taiwan, South Korea and Japan. Later in 2010 with the acquisition of Clear & Pure Video, the company began distributing in England and Scotland.
1st Logo
(1982-1985) 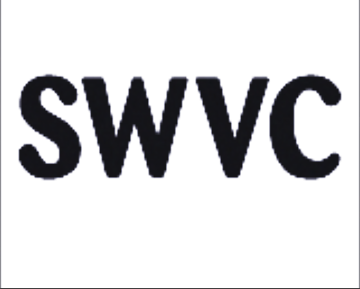 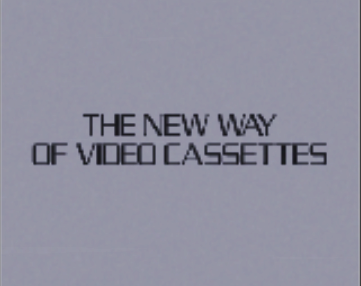 Logo: On a white background, the letters of the logo, "SWVC", zoom out one by one. After being finished for a few seconds, the whole screen splits in two to reveal a gray background with the black stacked letters "THE NEW WAY" (1st row) and "OF VIDEO CASSETTES" (2nd row).
FX/SFX: The letters of the logo zooming out, the screen splitting into two.
Cheesy Factor: The animation is done in a poor quality, while smooth.
Music/Sounds: A marching tune with an announcer saying "This videotape is brought to you by SWVC Video". A whoosh then plays over the theme, as the announcer finally says "The new way of video cassettes."
Availability: Seen on old VHS and Betamax releases from the company, most of them being copies of low-to-mid-budget films.
Scare Factor: None.
2nd Logo
(1985-1987)
Logo: On a gray background, two stacked rectangles (one white and one black) grow in and stop. The SWVC logo, now in another font, zooms out and places at the 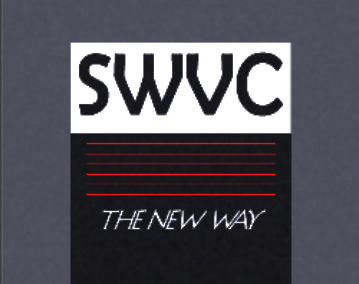 center of the white rectangle. Five red stripes wipe in at the top of the black rectangle, and "THE NEW WAY" in white fades in below all these stripes.
FX/SFX: The growing rectangles, the zooming out of "SWVC", the wiping stripes and fading in of the slogan.
Music/Sounds: A synthesized brass fanfare with the same announcer as the previous logo.
Availability: Very rare. First appeared on re-packaged copies of older prints, which have this logo plastered with the previous one. In 1987 the company started doing deals with major film companies so the logo became more common in a shorter time, before the next logo came in. Can be also seen on home video copies of small Australian shows.
Scare Factor: None.
3rd Logo
(1987-1992)
Nicknames: "The Blobs", "Blobs Of Doom"
Logo: On a sunset-themed gradient background, we see three semi-transparent blobs floating. They later merge and form the "SWVC" text from the previous logo. The 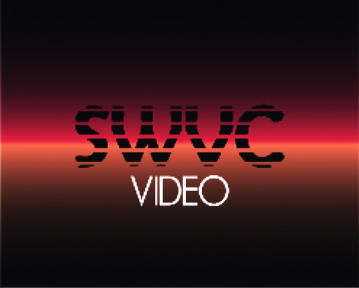 word flashes, as the formed text becomes black and 2D. The logo is sliced in 5 horizontal lines, and "VIDEO" fades in below.
FX/SFX: Nice 2D animation!
Music/Sounds: A creepy string note with a vibrato effect, followed by a 11-note electric piano tune with a bass guitar, also with vibrato. A whoosh is also heard when the text flashes, and a "ding" when the last note plays.
Availability: Rare. This is when SWVC started to make more copies of Hollywood films to distribute in Australia and New Zealand. Can be found on releases with RCA/Columbia International Video, MGM/UA Video, and CIC Video, mostly preceding their logos. Can be also found on VHS and Betamax copies of Australian TV shows like the previous logo.
Scare Factor: Low, due to the creepy music (which was later improved in newer logos) and slow atmosphere, although having harmless animation.
4th Logo
(1992-1997)
Nicknames: "Prism Circle"
Logo: On a black background, a glassy circle flips in. It gets more brighter and as a light passes to it from behind, making the circle refract a rainbow light, just like a 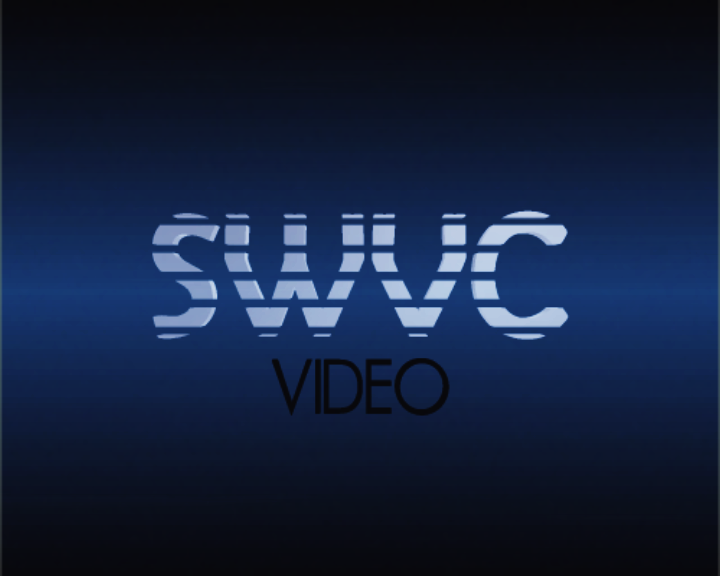 prism. We go to the right as we see the rainbow slice the "SWVC" text from behind, also looking glass-like, while a blue light appears at the middle of the background. Once the word is sliced, "VIDEO" fades in below.
FX/SFX: The circle flipping in, the refraction, the rainbow slicing "SWVC", the fading of "VIDEO". Good-looking CGI animation for it's time.
Music/Sounds: A soft fanfare with piano.
Music/Sounds Variants:
Availability: Rare. Check their 90's tapes to find it, mostly distributed by CIC or Warner Home Video.
Scare Factor: Minimal.
5th Logo
(1997-2002)
Logo: A flash occurs, leaving a cyan/blue gradient background with a metallic rectangular shape (which is striped), which zooms in and spins. One it gets closer to the 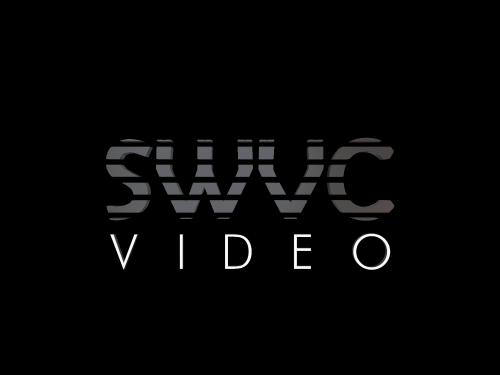 camera, it starts glowing in cyan while still spinning, but slowly. We go into the inside of the rectangle as the metallic letters of the SWVC logo come out of the top of the rectangle and go out of it as the camera follows. Once we get out of it, the word takes place and flashes, changing the background to black. The spaced out "VIDEO" fades in below the logo.
FX/SFX: All the CGI animation. Looks high-quality but very choppy.
Music/Sounds: A remake of the 3rd logo's music, full with an orchestra, gated synths and cymbals.
Availability: Rare. It only appears on their VHS releases from the time, which were mostly copies of 80's and early 1990's films.
Scare Factor: Low, due to the quickness of the animation.
6th Logo
(2002-2009) 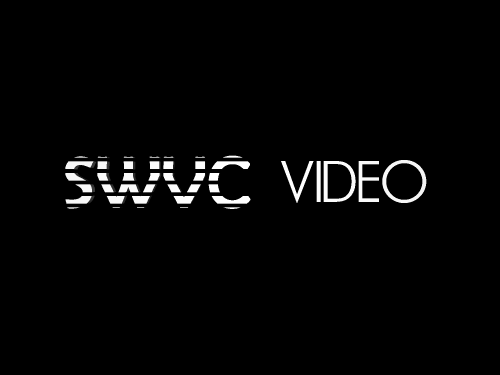 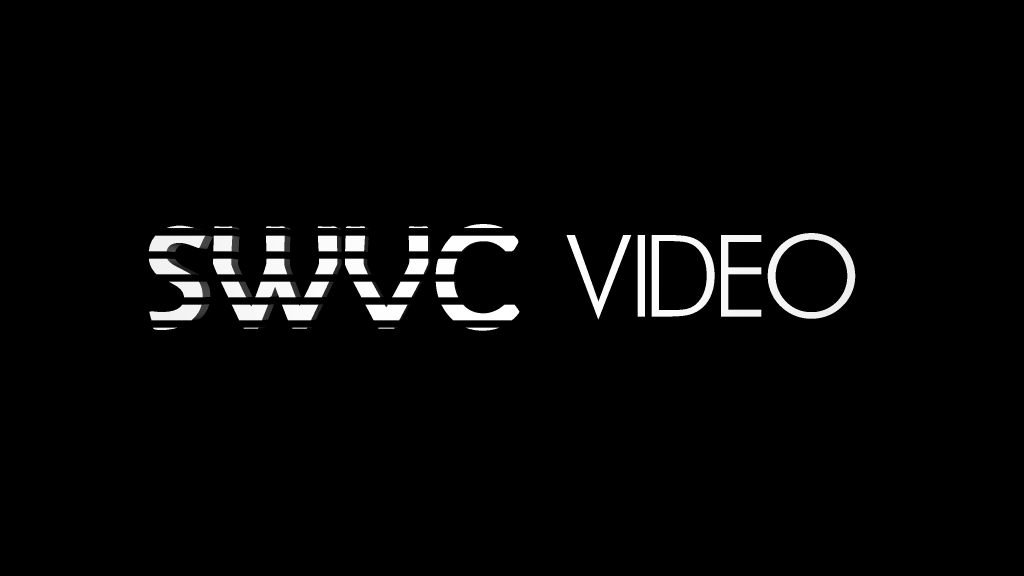 Nickname: "SWVC Videowall"
Logo: A flash occurs, leaving with a videowall of various films distributed by the company. As we zoom in for some seconds, we then look to the left to see the SWVClogo, with a vertical white light near it. The logo then flashes, the videowall dissapears and the logo moves to the left, so we can see "VIDEO" fade in next to it.
FX/SFX: The videowall, the movement of the camera, the logo moving, "VIDEO" fading in.
Music/Sounds: Same as the previous logo. In 2005 and beyond, it was high-pitched.
Availability: Rare. Can be seen on SWVC's last tapes and later DVDs. They mostly distributed 80's and 90's films and Australian shows from the time, so be careful finding it.
Scare Factor: None.
MORE TBA!