(NONE OF THESE SCREENSHOTS BELONG TO ME. THEY ALL BELONG TO THE YOUTUBE CHANNEL SALT COVER. ALSO I'M NOT INCLUDING THE WINDOWS MOVIE MAKER MADE ONES, AS I DON'T CONSIDER THOSE ONES REAL.)
Salt Cover is a parody of Brazilian Television networks like Rede Globo. They usually parody the TV continuity such as schedules and idents. This page is dedicated to the Idents.
1st Logo 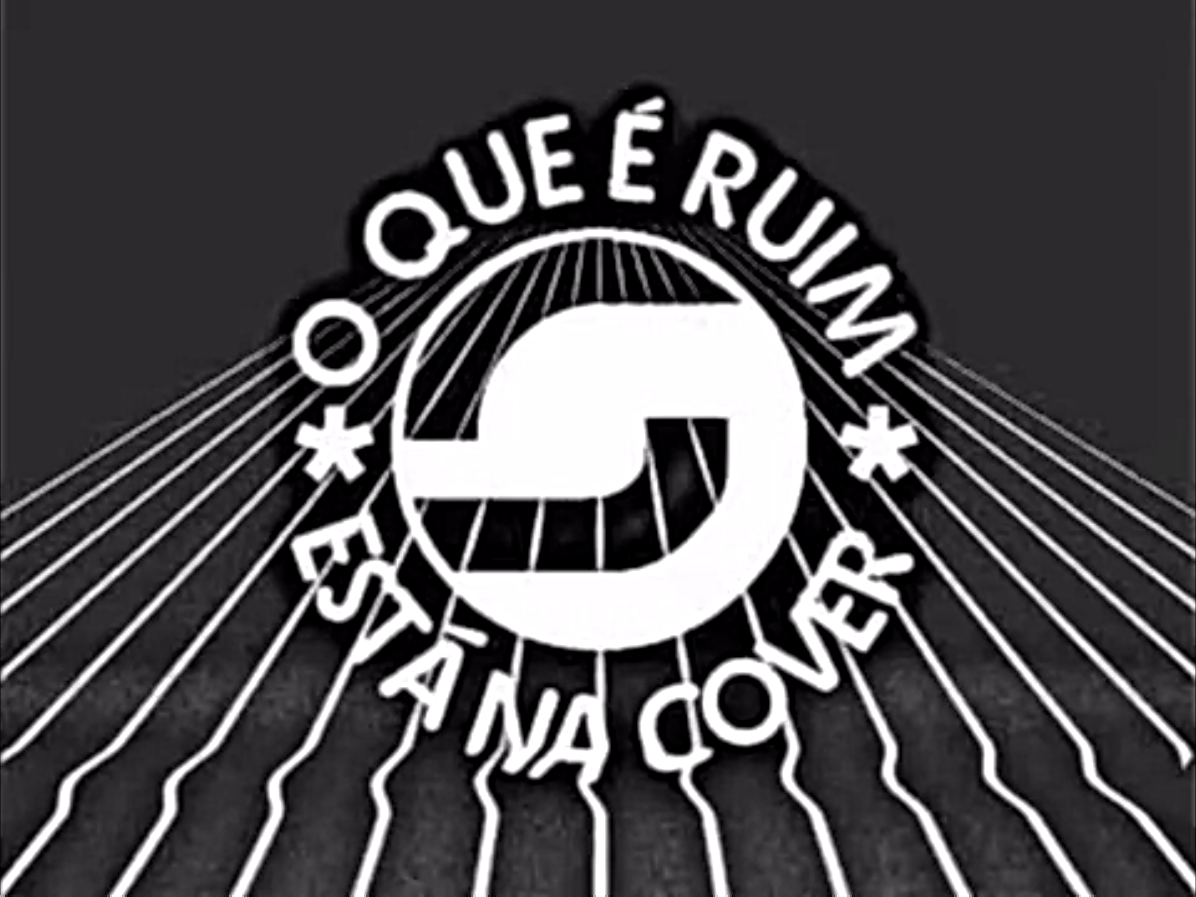 Nicknames: "The S of Salt" "O Que E Ruim Esta Na Cover" "What is Bad is on Cover" "Bootleg Globo"
Logo: The logo starts out with the word "Merchandising" on white stripes. The "chandising" is bent but is then back to being in line with the "Mer". The word than zooms out to reveal the word "Fofoca". The letters then move away. The word "Barraco" then appears with the letters bouncing around. The word then forms and then a second later jumps off screen. The words "Salarios A Trasados" then zoom in and then bend in a rainbow like shape. Then, the Salt Cover logo then zooms in with the words "O que e ruim esta na cover" as well as two asterisks. (As seen in the picture above.) The letters then start bending but go back to normal.
FX/SFX: The letters moving around.
Cheesy Factor: The logo is very advanced for the time period it's supposed to be in.
Music/Sounds: A flute theme followed by an upbeat trumpet theme. This music is a parody of the music used in the 1969 Rede Globo Ident.
Avalibility: Common. Can be found on certain Salt Cover videos. This is the case for all Salt Cover logos, so I'm not even going to bother putting this here on the other idents.
Scare Factor: Low.
2nd Logo 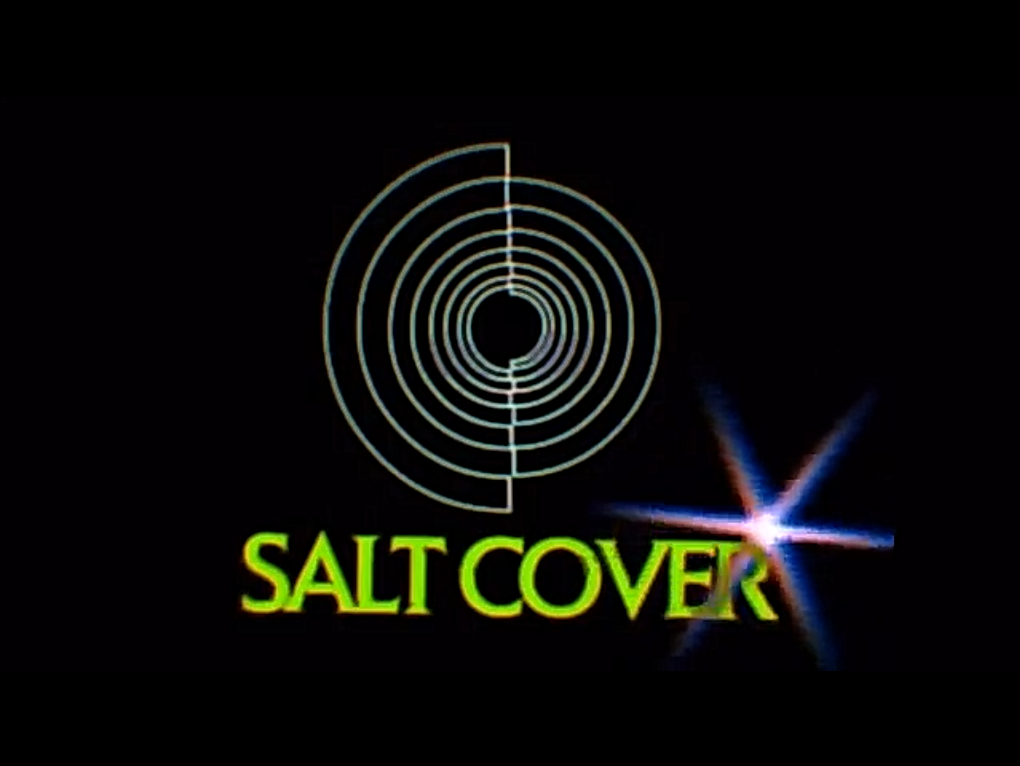 Nicknames: "The Vortex" "The Shine" "The Cut Circles"
Logo: A swirled version of the vortex appears. It quickly gets less distorted and the words SALT COVER come in. The logo then forms as a star shines on the R.
FX/SFX: The swirled version of the vortex logo.
Cheesy Factor: While not as impressive as the last one, the cinematic music is impressive. However it's unfitting for this logo.
Music/Sounds: A cinematic sounding jingle or a synthesizer.
Scare Factor: Low. However, the first version of the music might catch some off-guard.
3rd Logo 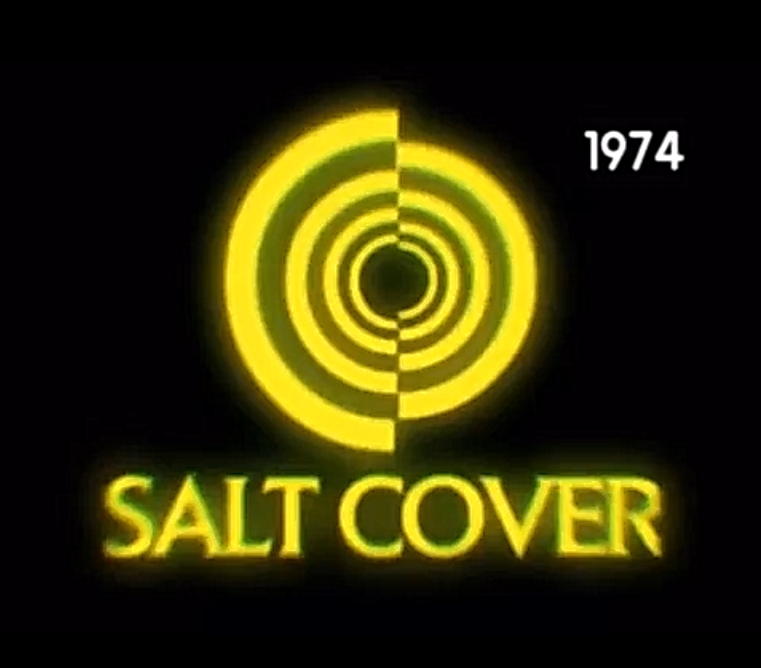 Nicknames: "The Vortex 2" "Rainbow Vortex" "The Cut Circles 2"
Logo: A wavy version of the vortex and the company name appear on screen. They then zoom towards the screen and change color, as well as get less wavy. The logo then ends with the image you see above.
FX/SFX: The wavy and multicolored logo.
Cheesy Factor: This logo is very cheesy compared to the last two. The music isn't triumphant or cinematic either. It barely has anything.
Music/Sounds: A one-note synth tune.
Scare Factor: Low. The fast zoom-in could scare some.
4th Logo 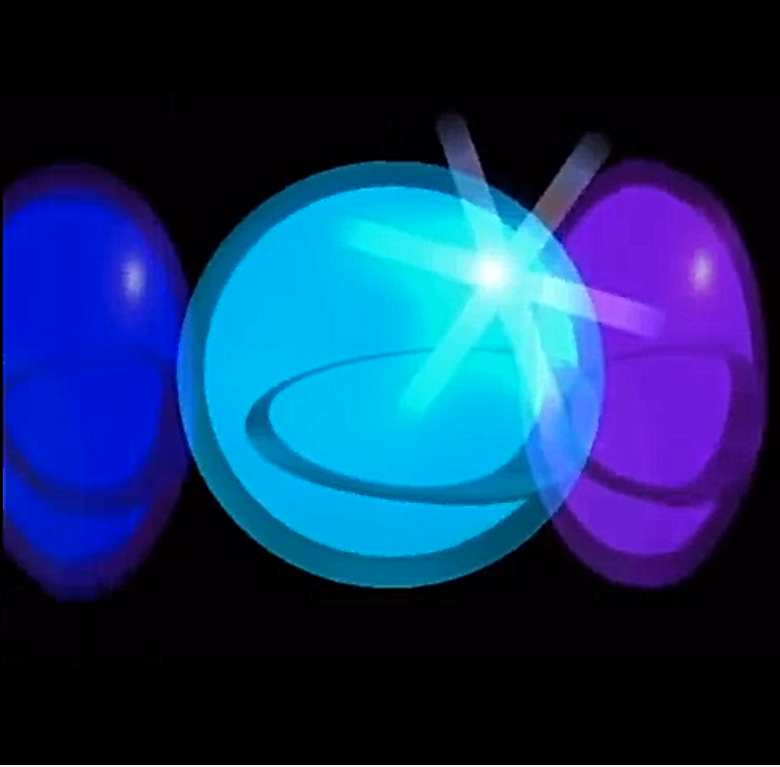 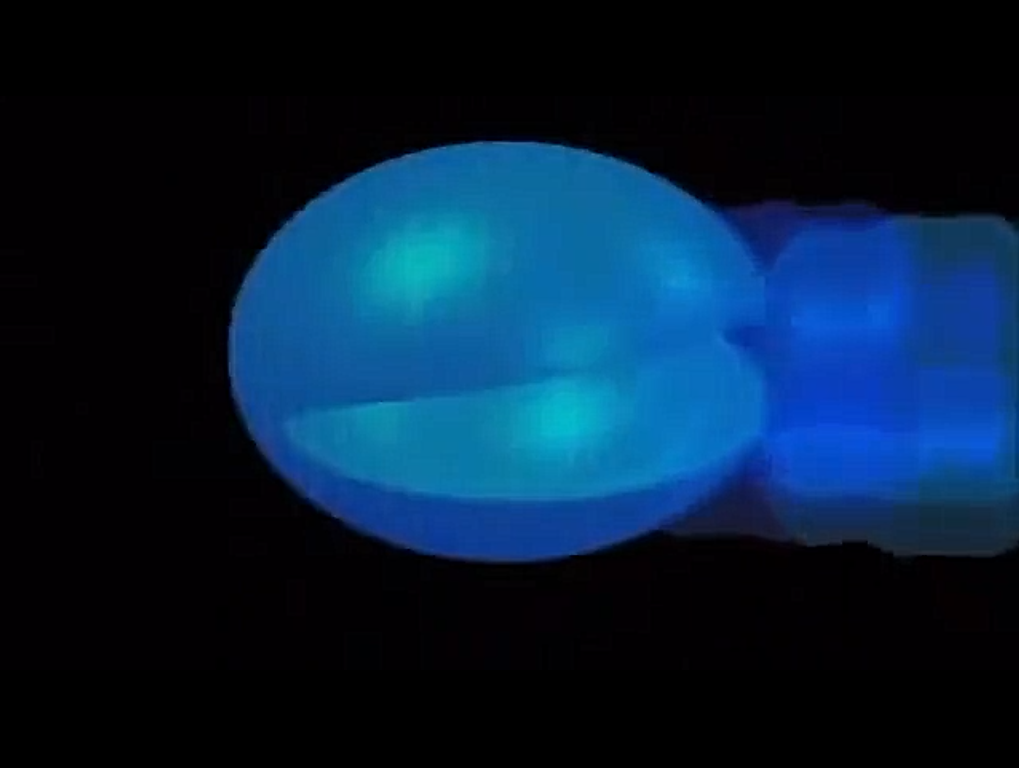 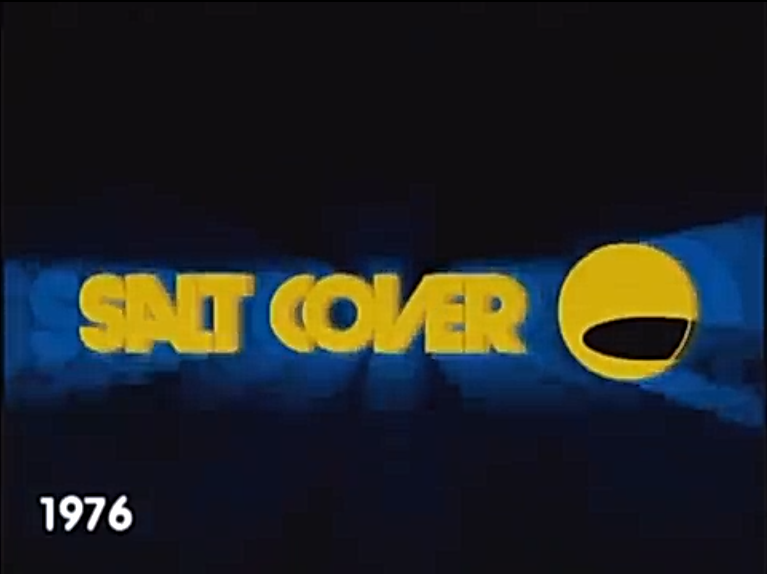 Nicknames: "The Mouth 2" "Blue Trail"
Logo: A yellow version of the Salt Cover logo is shown with a moving trail of bigger blue versions behind it.
FX/SFX: The blue trail.
Cheesy Factor: Besides the moving blue trail, this logo is basically just a still image.
Music/Sounds: I calm flute song.
Scare Factor: None
6th Logo 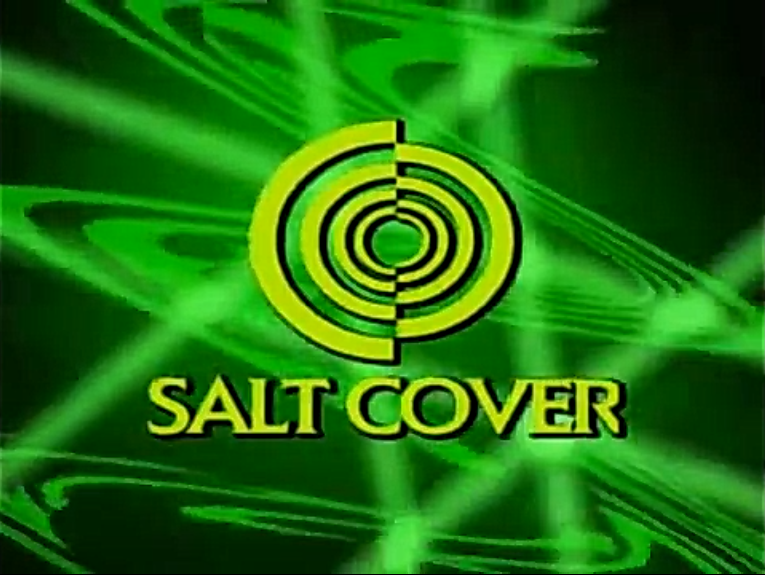 Nicknames: "The Vortex 3" "Green Waves" "The Cut Circles 3"
Logo: We start with a background of a green wavy version of the Cut Circles logo. Then a yellow Salt Cover logo zooms in.
FX/SFX: The Background.
Cheesy Factor: Average for a logo that is supposed to be from around 1975. Not good by today's standards.
Music/Sounds: A short synth jingle, with a waved sounding ending note.
Scare Factor: None
7th Logo 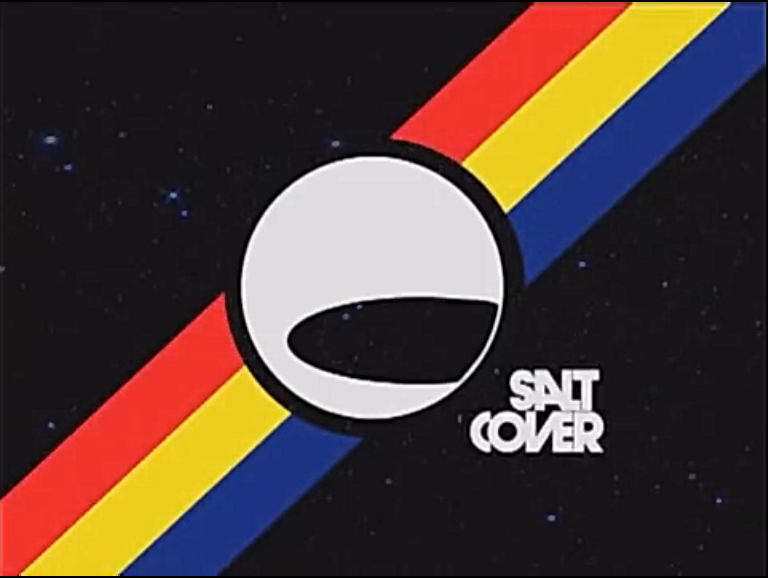 Nicknames: TBA
Logo: TBA
FX/SFX: TBA
Cheesy Factor: TBA
Music/Sounds: TBA
Scare Factor: TBA
8th Logo
(The first screenshot is 1, the second is 2, the third is 3, the fourth is 4, and the fifth is 5) 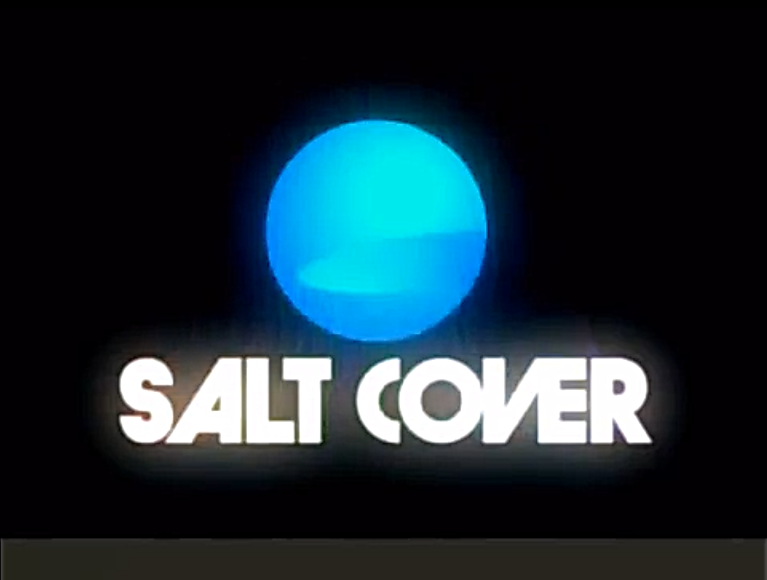 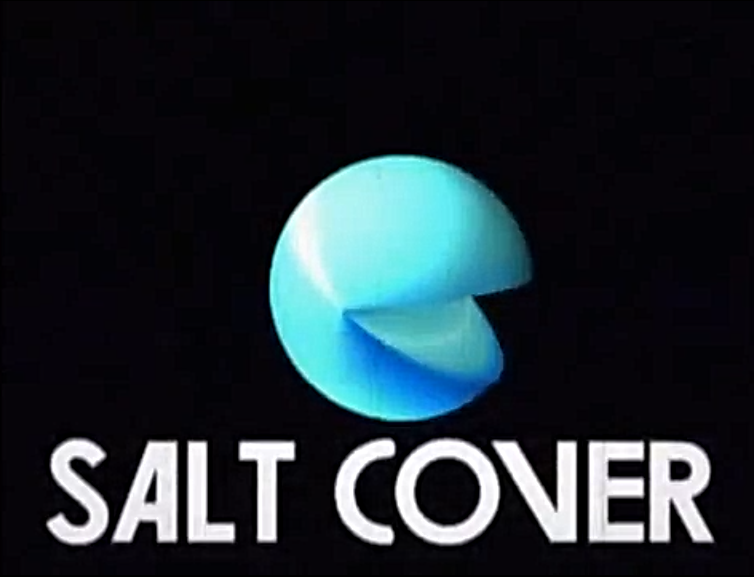 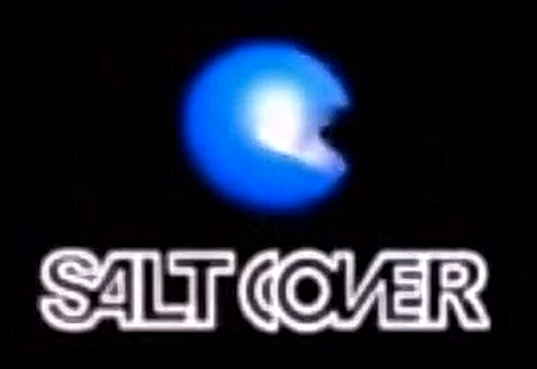 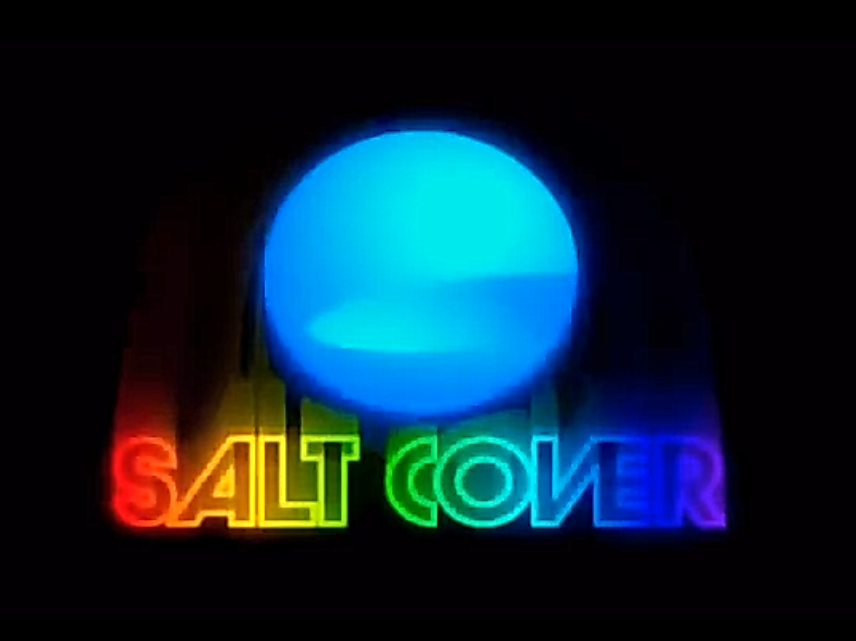 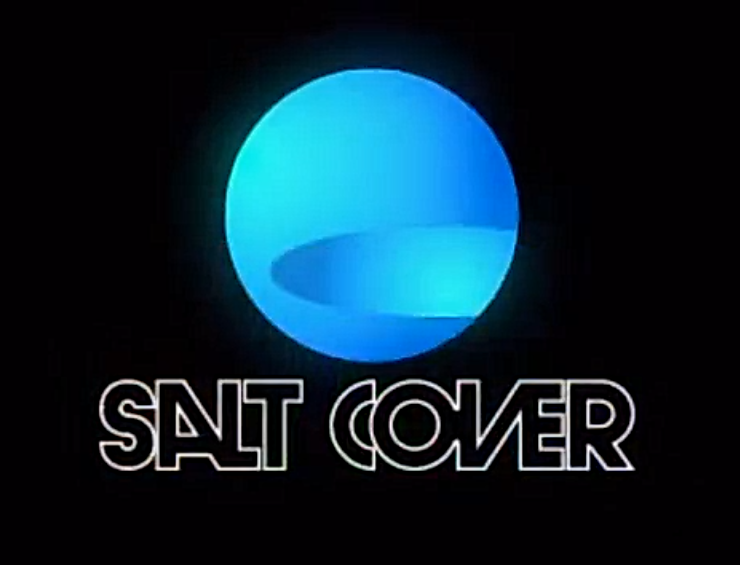 Nicknames: "The Mouth 4" "Rainbow" "Bootleg Globo 4" "Bootleg Globo 5" "Bootleg Globo 6"
Logos: 1-A Parody of the Bubble Rede Globo Ident. Ithas shines floating around. A bubble appears in the center then is segmented off with a rainbow light. This bubble would zoom in and form the mouth, with the Salt Cover text appearing from above with a rainbow trail.
2- Same as the first one but instead of shines, it's bubbled versions of a Pac-Man like version of the mouth. A rainbow also wipes across the screen, and then gets off the screen. The Pac-Man type logo then eats the bubbles in the middle of the screen and goes to position instead of the bubbles being segmented. Then the rainbow trail text appears but coming at a different angle. The same Pac-Man shaped Mouth logo is there, and it burps two times.
3-It is unknown which logo this logo is parodying (although the music does use the PBS 1971 ID Music). There are multicolored dots on each corner of the screen, which then form a huge grey dot in the middle of the screen. The huge dot then spins around like a disc, and turns into a wireframe sphere. The sphere then turns into the Salt Cover logo, and the rainbow text comes quickly. The text then glows once the animation is done.
4-Although there is no ocean, the beginning of this logo is most likely a parody of the "Ocean" Rede Globo ID. There is a metal sphere, and it gets smaller by rings. The circle that the sphere and the rings form turns into a light. The light leaves a purple trail and goes to every corner, before finally going to the middle of the screen. It then turns into the Salt Cover mouth logo. The usual rainbow trail then comes, but is slow and it cuts off before it can finish.
5- This is a parody of the short 1978 Rede Globo Ident. The only difference is that the Globe is changed to the Mouth, and REDE GLOBO now says SALT COVER.
Oddities: The text in the 2nd one is thinner than the others and has a backwards V, and the 3rd one has a different font that the others. The A in the 5th one is backwards as well.
FX/SFX: The rainbow trail and the shines/bubbles. In the 2nd logo, there are 2 sfx. The sound the bubbles make, and the burping sound the logo makes.
Cheesy Factor: 1- Not cheesy at all. 2- Either CGI in 1978, or really good scanimate. 3- Very blurry and not much to it. Also the ending is kind of abrupt. 4- Again, not cheesy at all. 5- Not much to it.
Music/Sounds/Announcer: 1- Synthesized notes and then dramatic chord with choirs singing "SALT COVER". 2- A drum beat in front of a distorted version of the "Bubbles" Globo Ident, with two burps at the end. 3- The descending sound from the PBS 1971 Ident (as well as the rest but very quiet) with a funky disco beat. Then, the warbling synth tone from the original Globo IDs. 4- A synth tune followed by a long chord. There can also be a high pitched announcer. 5- A three note guitar jingle with a final trumpetlike-synth chord, with a descending sound in the background.
Scare Factor: 1- Not to Little. 2- Little to Medium. The music could startle some. 3- Little. The sudden zoom of the company name could startle some. 4- Little. 5- None.
9th Logo 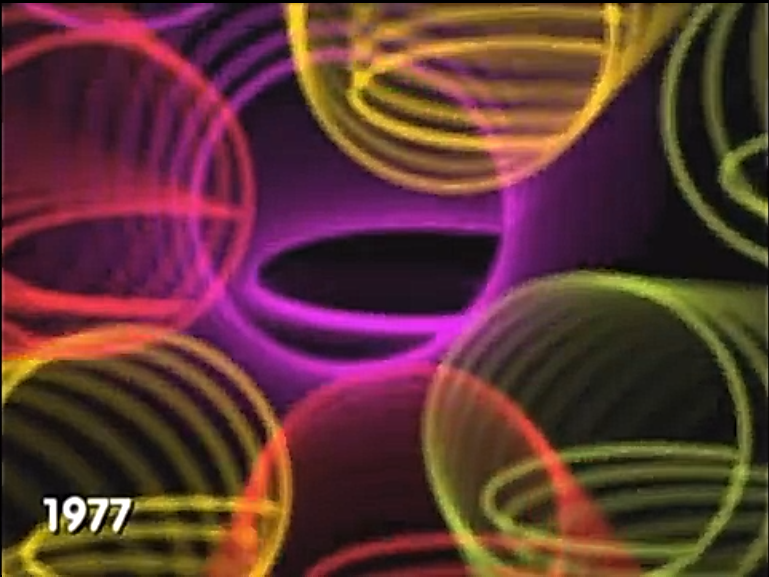 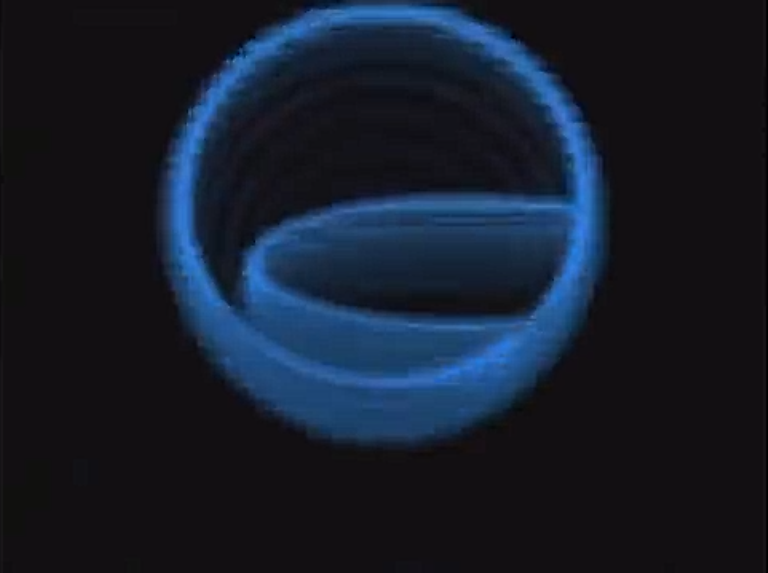 Nicknames: "The Mouth 5" "Simple Mouth 1" "Trailed Mouths"
Logo: A bunch of multicolored mouths zoom in, leaving trails behind. It then fades to a blue mouth spinning around, also leaving trails behind.
FX/SFX: The Mouth Trails
Cheesy Factor: Fine for a logo that is supposed to be from 1977.
Music/Sounds: A soothing, calm, synth song
.
Scare Factor: None.
10th Logo 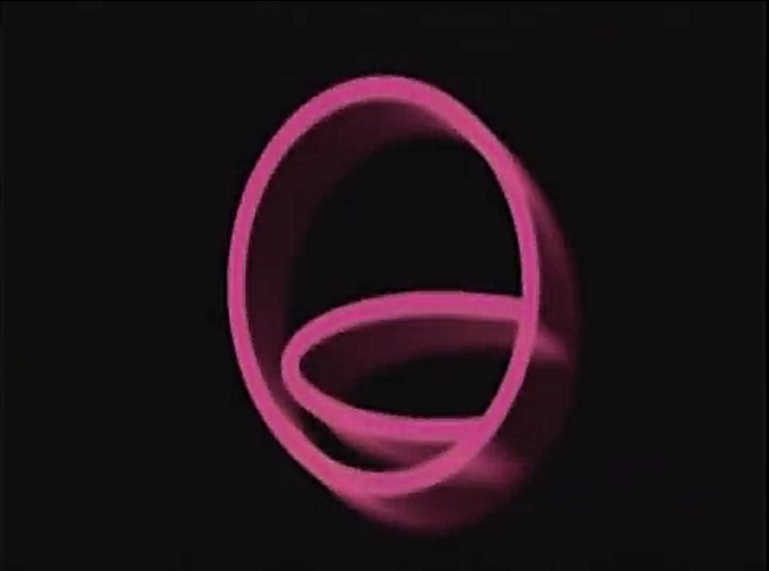 Nicknames: "The Mouth 6" "Simple Mouth 2"
Logo: A bunch of multicolored mouths go into the middle to form a pink 3D mouth.
FX/SFX: The Mouths
Cheesy Factor: See the last one.
Music/Sounds: A trumpet jingle.
Scare Factor: Little. Music could surprise some.
11th Logo 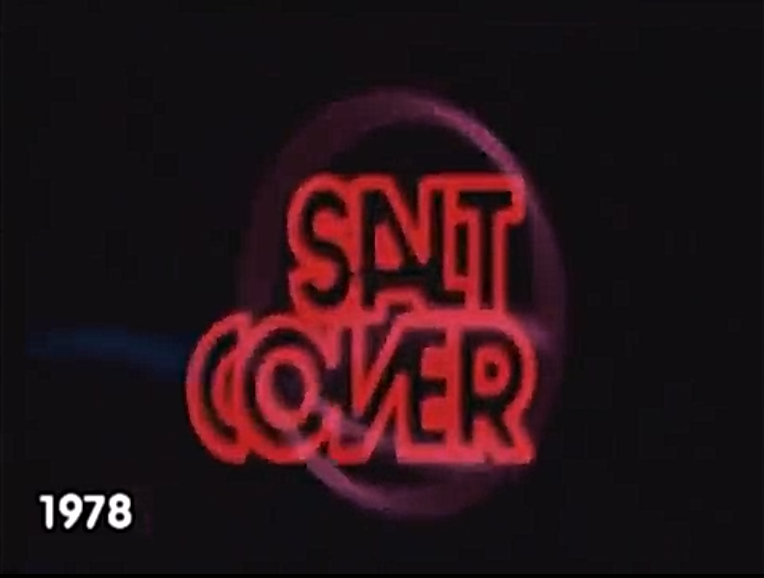 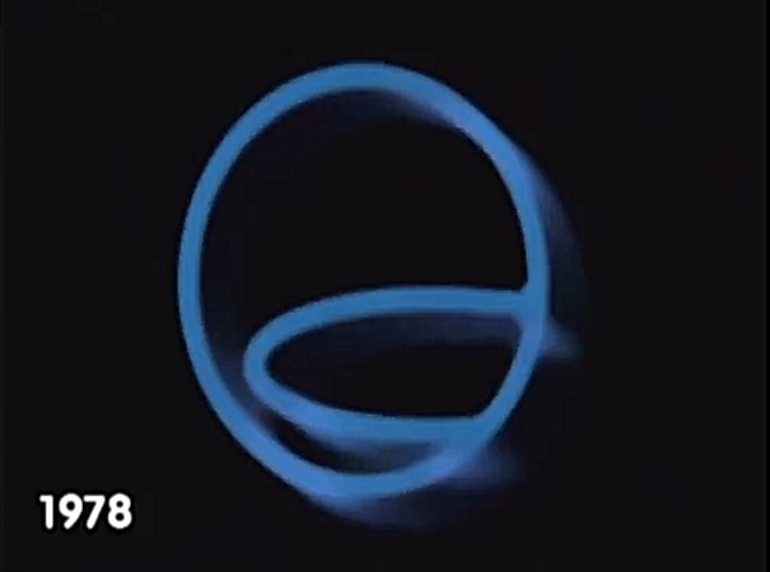 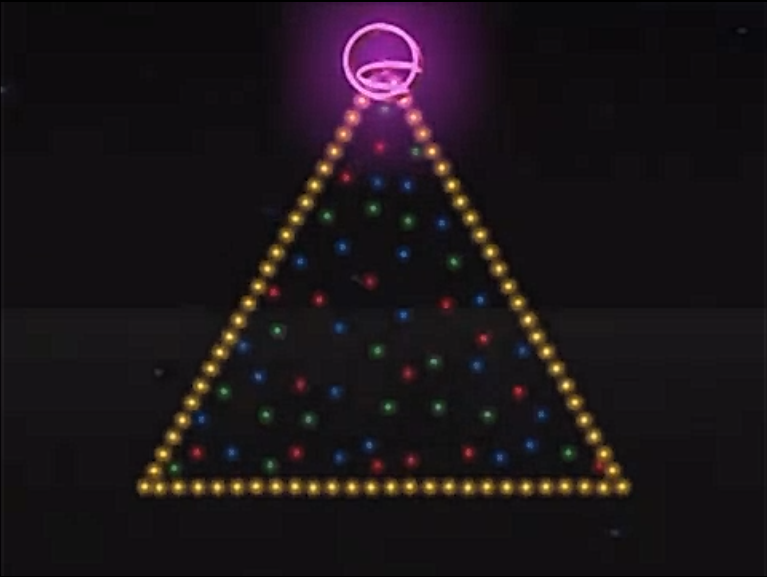 Nicknames: "The Mouth 9" "Simple Mouth 5" "Christmas Mouth"
Logo: A blue, green, yellow, and red mouth all zoom in towards the camera and then dissapear. A bunch of lights then show up and as a triangle-shaped border forms around it. The pink mouth then shows up at the top of the triangle.
FX/SFX: The trail of the multicolored mouths.
Cheesy Factor: See last four
Music/Sounds: A snazzy disco-like tune with a guitar and a violin.
Scare Factor: None
14th Logo 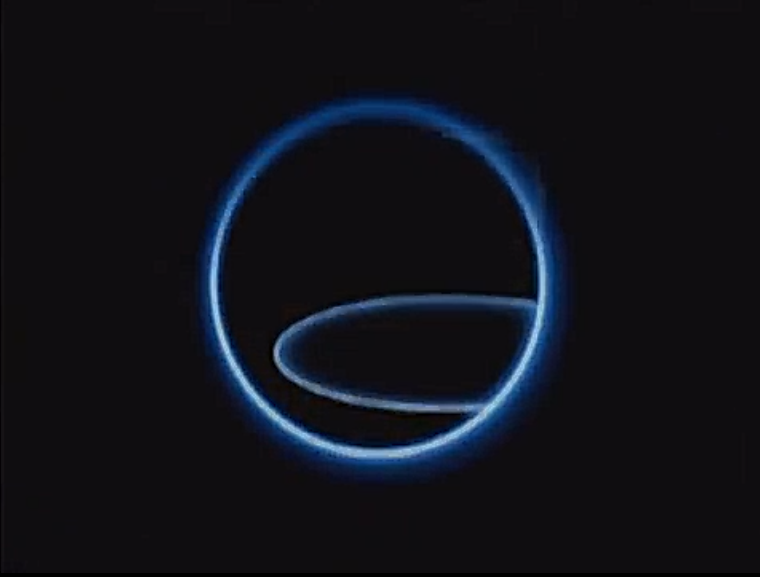 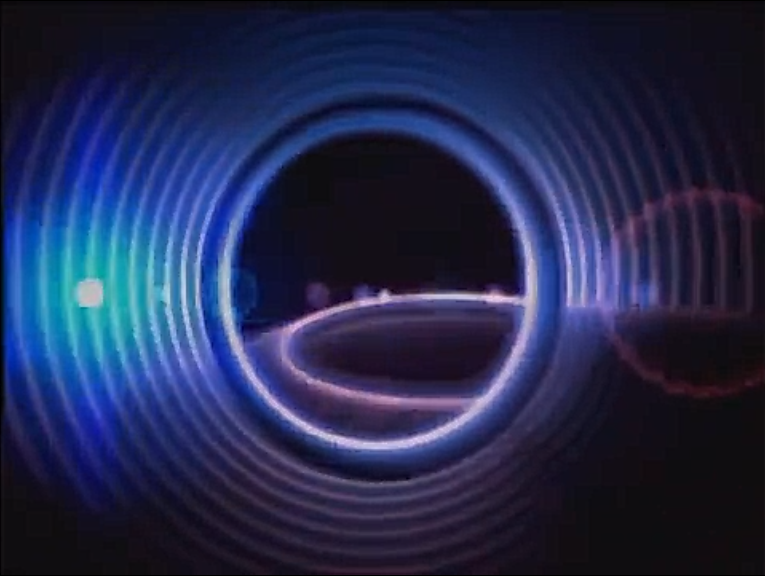