Background: Stupid Adult Studios was founded in 1988 to produce Stupid Adult Films, no logo was shown until 1989. 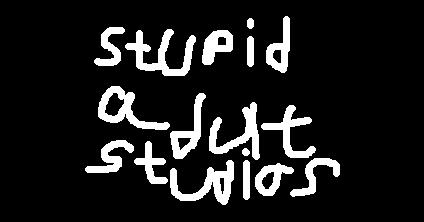 Nicknames: "The Most Boring Logo Ever"

Logo: On a black background we see the boring words in white, Stupid Adult Studios, that's all.

Cheesy Factor: People may think this logo is boring because it is still.

Scare Factor: None, it's boring.

Logo: On a black background we see the 3D silver words fly up to the screen from the bottom, STUPID ADULT STUDIOS, the copyright date fades in at the bottom.

FX: The words flying up, the copyright date fading in below.

Music/Sounds: The opening theme of the movie.

Scare Factor: None, this is much better than before.

Logo: We see someone walk into a jail cell, inside the jail cell are the words: "Stupid Adult Studios".

FX: The man walking into the jail cell.