Logo:On a black background, the camera dives deep into a pile of gold gemstones. Then we fade to a night sky with a 20th Century Fox-style structure, with the 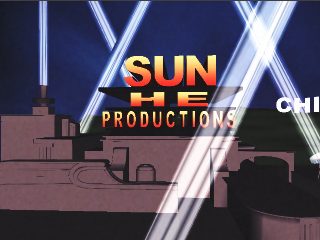 words "20TH CENTURY FOX" replaced by "SUN HE PRODUCTIONS". The camera spins and zooms out a bit.

Cheese Factor:The whole animation is made with BuffTitler, and at the 2nd half, how a 20th Century Fox ripoff look any more blatant than this?

Music/Sounds:A fantasy-themed fanfare, then it crossfades to the 2nd half of the 20th Century Fox fanfare.

Availability:It can be found on some late VHS and VCD's by Sun He.

Scare Factor:None to minimal, this logo is just amusing.