Logo descriptions and captures by SnowflakesOmega
Background: Uned Distribusi was a film distribution company from Bandung, Indonesia that ran from 1995 to 2005. They distributed various films from low-budget Indonesian film studios into the cinema market.
1st Logo
(1996-1998) 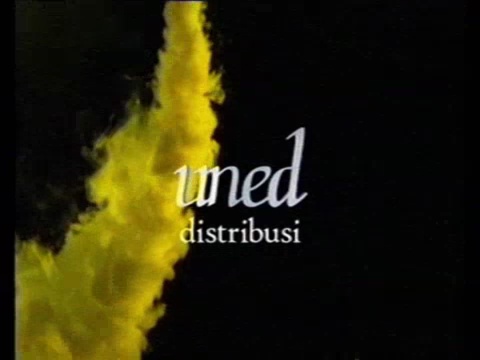 Logo: We see yellow smoke coming out of the top of the screen. The chrome word "uned" falls from the emitting position of the smoke, zooms as it goes to the bottom-left corner, and moves to the center. Once it's done, "distribusi" appears below it.
FX/SFX: The live-action smoke, the word moving, zooming and spinning.
Music/Sounds: A bombastic fanfare that's actually from the chinese Golden Gate logo.
Availability: Very rare. Found on the 1997 Semesta Baru VHSs of Santa, mengapa? and Mendapatkan pekerjaan. Other releases distributed by this company would have this logo appear on them, including occassional TV airings.
Scare Factor: Low to medium, due to the fanfare.
2nd Logo
(1998-2002) 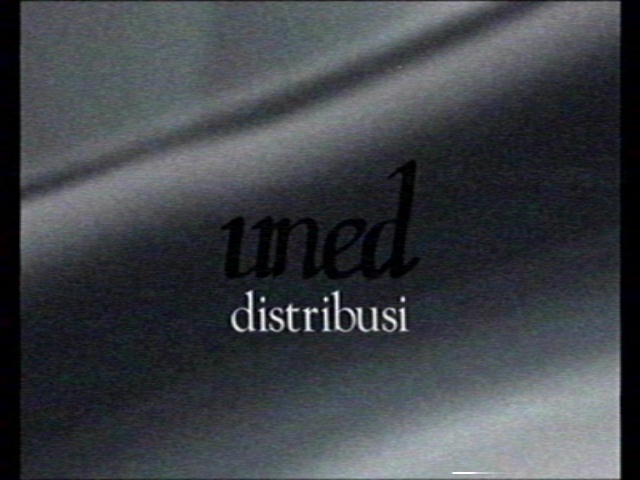 Logo: On a black background the gray word "uned" is seen writing. When it's finished, the 3D silver version of the word comes out, making it fade away. The word moves to the bottom-right corner, extends itself and rotates while a silver rectangle is seen zooming while spinning vertically. The rectangle takes all of the screen when it finishes, and the word shortens itself when it goes to stop at the center. It also goes black. Then the word "distribusi" scrolls up below the text.
FX/SFX/Cheesy Factor: Everything. More on action than it's predecessor, although having less quality unlike it.
Music/Sounds: Starts with a deep sound, then a brass fanfare with crashes which seems to be taken and edited from another Chinese logo.
Availability: Scarce. Can be found on TV airings and Semesta Baru & Bingkai Biru Video tapes/VCDs from the time, including newer prints. Found on the films Hari Ini Bukan Hari, Pemrotes and Koyok.
Scare Factor: Low to medium, including the darkness and crash sounds.
3rd Logo
(2002-2005) 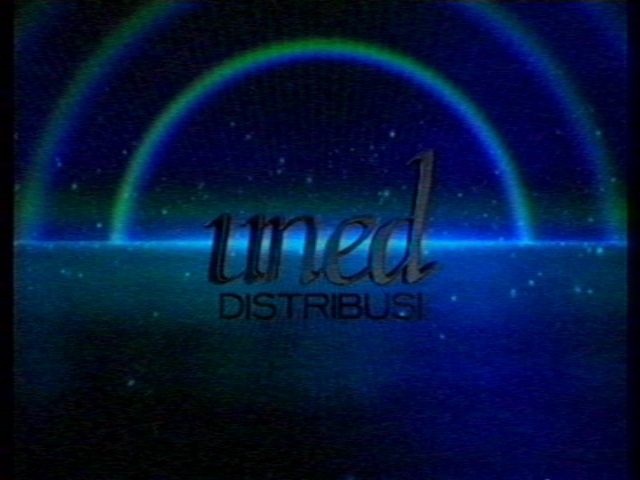 Logo:We zoom out on a black background with glowing blue-tinted rainbows, particles and a blue light, with a floor in the bottom part. The word "uned" in black comes out, rotates and zooms in to us. A white light later appears and forms "DISTRIBUSI" while moving from left to right, now in a different font.
FX/SFX: Better CGI than before.
Music/Sounds: The same edited fanfare from the previous logo
Availability: Scarce. Still found on home video releases and TV airings of their films. First one to use it was Bernyanyi Bunga on april of 2002, with the last film with it being Keramaian, which was also the last film distributed by the company.
Scare Factor: Low. The music and darkness may still surprise people but the animation's more tamer.