Background: View Askew TV is a real company, but I decided to make my own logo! 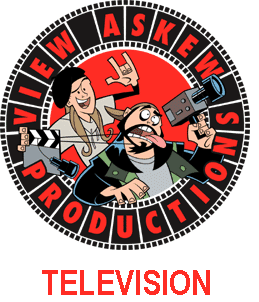 Logo: We see a still animated screenshot of the current VA Logo, meanwhile, the word "Television" fades in.
FX:
Low, It's Still, with "TELEVISION" fading in.
Music\Sound Effects:
Only A Clapboard, and Jay Saying "Snooch To The Nooch!"
Avalibility:
Seen on Post 2007- episodes of Clerks: The Animated Series and other shows starring Kevin Smith, like Parr Terrie.
Scare Factor:
None. A Very Funny Logo.