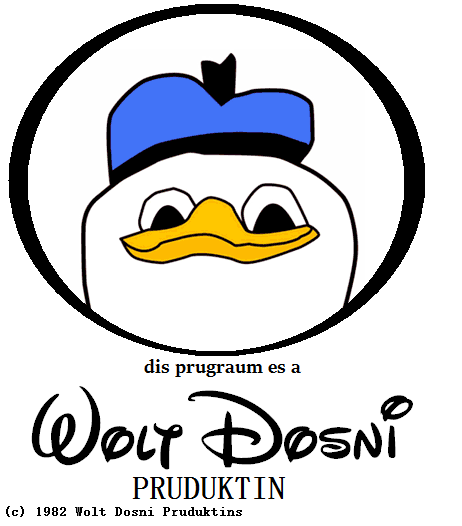 Logo:On a white background, we see Dolan in a circle, and the text, dis prugraum es a Wolt Dosni Pruduktin, with the copyright notice at the bottom.
Variations:
Music/Sounds:Dolan saying the text, from 1969 - 1980, the ending theme played over the logo.
Availability:Rare, as the episodes from the era are barely ever reran, when Dosni Channl airs 1998 - 1999 episodes of the show, this logo is mostly intact. The Goob Troob variation is very rare, as all reruns in the UK have been plastered with the next logo since 2008.
Scare Factor:Low to medium, it really depends on what you think of Dolan's cold stare. None for the Goob Troob variation, medium to nightmare for the Halloween variation, Dolan lunging into your face is very scary.
2nd Logo (1986 - present) 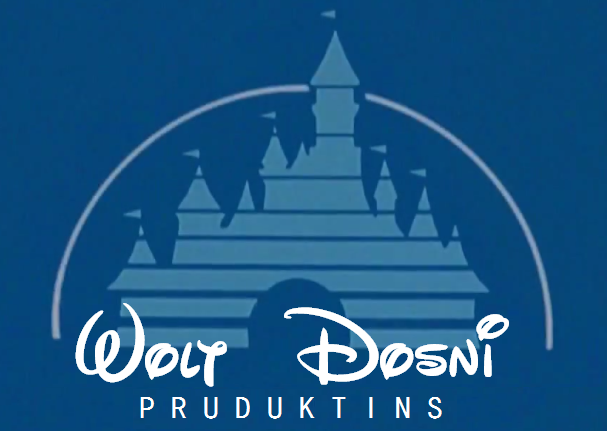 Logo:The same as it's movie counterpart, instead "P I K T U R S" is replaced with "P R U D U K T I N S"
Music:None.
Availability:Common, seen on Dosni shows since Duktalsand Goob Troob. You can see it on reruns of 1999 - 2000 episodes ofThe Dolan Duck Showon Dosni Channl, also seen on episodes since 2001 of said show.
Scare Factor:None.